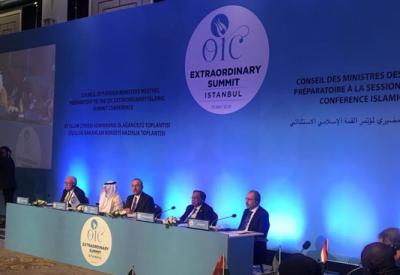 DHAKA, May 18, 2018 (BSS)- Foreign Minister Abul Hassan Mahmood Ali is leading an eight-member Bangladesh delegation to the 7th Extraordinary Summit of the Organisation of Islamic Cooperation (OIC) on Palestine in Istanbul today.

The foreign minister began his busy day by attending the Council of Foreign Ministers preparatory to the Summit as chair of the current CFM in the podium, while the Adviser for Defence and Security to the Prime Minister, led Bangladesh delegation in the Council meeting. The Summit is taking place later today.

The Council was preceded by the Senior Official Meeting (SOM) on Thursday (May 17) that prepared the draft Final Communiqu, and the Bangladesh delegation to the SOM was led by Ambassador AFM Gousal Azam Sarker, DG of the Ministry of Foreign Affairs.

The Summit is focusing on the massacre of the peaceful Palestinian civilian protesters by the Israeli forces as well as on the official opening of the US Embassy in Jerusalem on May 14, 2018.

Mahmood Ali would convey that the people and the government of Bangladesh under Prime Minister Sheikh Hasina strongly condemn and totally reject the Israeli atrocities, deplore the US relocation of the embassy, and express full support, sympathy and solidarity with the Palestinian brothers and sisters in their legitimate cause of an independent, viable and contiguous state of Palestine under a two state solution.

The council has reached consensus on the Final Communiqu, for adoption by the Summit tonight.