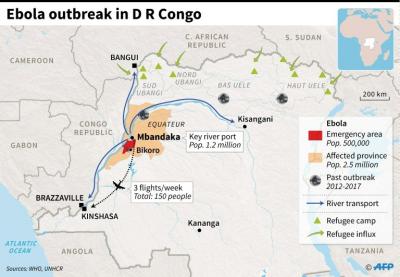 KINSHASA, May 18, 2018 (BSS/AFP) - World agencies and neighbouring countries on Friday hiked their response to an Ebola outbreak in the Democratic Republic of the Congo as the toll from the notorious disease mounted.

A World Health Organization (WHO) emergency panel met to determine whether the outbreak was "a public health event of international concern" -- a move that would step up global action.

The death toll rose by two to 25 out of 45 cases, WHO spokesman Tarik Jasarevic told reporters in Geneva on Friday. Fourteen of the cases have been confirmed in laboratory tests.

Alarm bells sounded on Thursday after the outbreak, previously reported in a remote rural area, notched up its first confirmed case in a city -- the bustling transport hub Mbandaka.

That amounts to bad news for containing and rolling back the haemorrhagic fever virus, experts warned.

"The confirmed case in Mbandaka, a large urban centre located on major national and international river, road and domestic air routes increases the risk of spread within the Democratic Republic of the Congo and to neighbouring countries," the WHO said.

"WHO has therefore revised the assessment of public health risk to very high at the national level and high at the regional level," it said.

"At the global level the risk is currently low. As further information becomes available, the risk assessment will be reviewed."

A regional bloc, the East African Community -- five of whose six members of the DRC -- said it was on "high alert" over the outbreak and had put in place measures to screen travellers arriving from that country.

The fresh Ebola outbreak, publicly declared on May 8, was first reported in a rural part of Equateur Province in the vast country's northwest.

Ebola is both lethal and highly contagious, which makes it difficult to contain -- especially in urban environments where people are mobile and come into more contact with others.

Lacking an arsenal of drugs to treat the virus, doctors isolate patients and trace people who have been in contact with them.

This is a major task even for medical services in rich countries, but the DRC is one of the world's poorest countries.

A country four times the size of France, the DRC has been chronically unstable and episodically racked by violence since it gained independence from Belgium in 1960.

In Mbandaka, whose population is estimated at up to 1.2 million, the mood among many people changed from insouciance to worry on Thursday.

Bars, restaurants and public offices set up basins of water and soap dispensers for people to wash their hands, while at the city's airport, health ministry workers were taking travellers' temperatures with pistol thermometers, an AFP reporter saw.

Ebola is notorious for its high fatality rate and extreme symptoms, which can include internal and external bleeding.

The virus has a reservoir in tropical African wildlife, being carried by species of bats, which do not themselves fall ill but can pass the pathogen on to humans who hunt for food.

Chimpanzees, gorillas, monkeys, forest antelope and porcupines can also become infected with Ebola, which makes them potential vectors for transmission if they are hunted and butchered.

Among humans, the commonest form of infection is through close contact with the blood, body fluids, secretions or organs of someone who is sick with Ebola or has recently died.

This presents a major risk in African cultures where relatives typically touch the body of the deceased at funerals.

The current outbreak involves the same strain of the virus that hit three West African countries in 2013-15 and sparked an international panic.

It went on to kill more than 11,300 people, in the deadliest ever Ebola epidemic.

The WHO was fiercely criticised over its handling of the epidemic and has pledged to improve its emergency response.

There is no licensed drug to treat or prevent Ebola, although an experimental vaccine arrived in the DRC on Wednesday and has been cleared for use by the Kinshasa government.