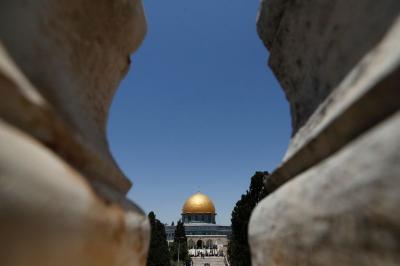 JERUSALEM, May 23, 2018 (BSS/AFP) - The newly-opened US embassy in Jerusalem has said ambassador David Friedman was duped into being pictured receiving a photo of east Jerusalem with the revered Al-Aqsa mosque erased.

In a picture published Tuesday night by ultra-Orthodox Jewish news site Kikar Hashabbat, the Islamic shrine on a flashpoint site holy to both Muslims and Jews is replaced by a simulation of a Jewish temple.

The picture could further inflame anger amongst Palestinians, already furious over last week's transfer of the US embassy in Israel from Tel Aviv to Jerusalem after Washington recognised the disputed city as capital of Israel.

A US embassy statement said the doctored image was pushed in front of Friedman without his consent during a visit to a charitable institution in Bnei Brak, near Tel Aviv.

"Ambassador Friedman was not aware of the image thrust in front of him when the photo was taken," it said.

"He was deeply disappointed that anyone would take advantage of his visit to Bnei Brak to create controversy."

It said it had demanded an apology from the charity Achiya, an official of which had presented the picture to Friedman.

In a statement published in Israeli media, the group said a member of its staff had presented the picture on his own initiative without consulting others.

"We regret that a petty political gesture spoiled this event," it added.

Friedman, who is Jewish and a longstanding supporter of Jewish settlement in the Israeli-occupied West Bank, is deeply unpopular among Palestinians.

Palestinian president Mahmud Abbas in March labelled him a "son of a dog".

The story of the contentious picture hit the front pages of several Palestinian newspapers on Wednesday.

Senior Palestinian official Saeb Erekat was quoted in Palestinian daily Al- Quds as saying that the United States is turning the Israeli-Palestinian dispute "into a religious conflict."

The Al-Aqsa compound, in Israeli-annexed east Jerusalem, is a shrine for Muslims worldwide and a potent symbol of Palestinian national identity.

The second Palestinian intifada broke out in 2000 after right-wing Israeli opposition leader Ariel Sharon visited the site. Jews also revere the site, known as Temple Mount and believed to be the location of the first and second biblical Jewish temples. A small number of Jews advocate building a third Jewish temple there in the belief that doing so would hasten the coming of the messiah.

Jews are allowed to visit but not to pray there, to avoid provoking tensions.

It is the scene of recurring clashes.

Last July, three Israeli Arabs shot dead two Israeli police officers nearby and fled into the mosque compound -- known in Arabic the Haram al-Sharif, or noble sanctuary -- where they were themselves gunned down.

Israel said weapons had been cached inside the compound and closed it for two days while it set up stringent security measures, including metal detectors and surveillance cameras.

Tensions over the move spiralled into days of clashes between Palestinians and Israeli security forces as worshippers gathered for protest prayers outside the compound.

The US embassy said Wednesday it did not support any change to the status of Jerusalem's holy places.