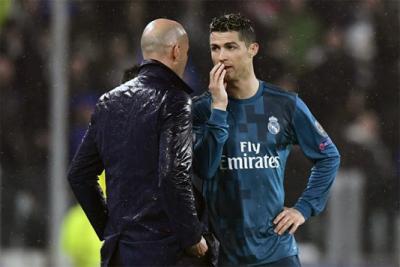 MADRID, May 18, 2018 (BSS/AFP) - Zinedine Zidane has declared Cristiano Ronaldo "120 percent" fit ahead of the Champions League final and says Real Madrid's star player is available to face Villarreal in La Liga on Saturday.

Ronaldo sprained his ankle against Barcelona earlier this month, prompting fears the Portugese might not make the clash against Liverpool on May 26.

But Zidane insisted Ronaldo would be "150 percent" fit for the game in Kiev and he delivered another positive update on Friday.

Ronaldo has trained with the first team squad as normal this week and could be given the chance to hone his sharpness against Villarreal, in Real's final league game of the season.

Real can still snatch second place from Atletico Madrid if they win and Atletico lose at home to Eibar on Sunday but Zidane's players will be keener to make their case for a starting spot against Liverpool.

Gareth Bale, in particular, will be under scrutiny, with the Welshman's place far from secure despite his man-of-the-match performance against Celta Vigo last weekend.

Bale scored two excellent goals in the victory but Zidane twice dodged the chance to say his display will influence his thinking.

"You can say he's better because of the goals he has scored, but he has been training well," Zidane said.

"The most important thing is to see everyone in good physical shape. That's what I care about."

Real's disappointing season in the league, which has them languishing 15 points behind champions Barcelona, has been in stark contrast to their success in Europe.

If they beat Liverpool, they will be the only club to have won the Champions League three times in a row while Zidane will join Carlo Ancelotti and Bob Paisley as the only coaches to own a trio of European crowns. "It would be huge," Zidane said. "It would mean a lot of things. It would mean we have been doing our job well and that my message has been getting through to the players and the staff.

"It's great to start my managerial career at this level but for me the most important final of the Champions League is this one, not the last one. We have to give it everything."