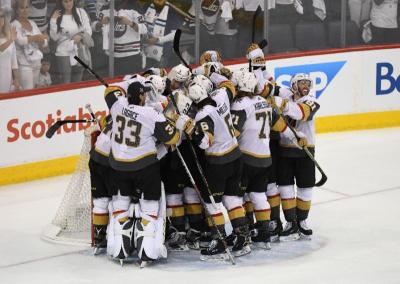 LOS ANGELES, May 21, 2018 (BSS/AFP) - The Vegas Golden Knights moved within sight of making National Hockey League history on Sunday, completing a 4-1 series victory over the Winnipeg Jets to become the first expansion team in 50 years to reach the Stanley Cup Finals in their debut season.

A deflected goal in the second period from Ryan Reaves clinched a 2-1 victory for the Knights, who were written off as 500-1 no-hopers before the start of season but who could now become the first expansion team ever to win the Stanley Cup at the first attempt.

The newly minted Western Conference champions from Nevada will face either the Tampa Bay Lightning or Washington Capitals in the finals of the NHL showpiece.

The Lightning could claim the Eastern Conference crown with victory over the Capitals on Monday in game six of a series they lead 3-2.

Neutrals will almost certainly be rooting for the Knights however.

Barely a year ago the team's roster had not been assembled, and the franchise compiled their squad from players who had mostly been overlooked or discarded by other franchises.

The hodgepodge nature of the team has led to players from the franchise cheerfully referring to themselves as the "Golden Misfits", but they have hardly put a foot wrong through their debut campaign.

"It's insane. If you go back to the beginning of the season, your goal is always to make the playoffs," said Knights defenceman Deryk Engelland. "But if I were to guess I would be sitting here doing this right now, you would be a little skeptical at the time.

"But once we got rolling, we saw we have a team that can do some damage ... It's been an amazing ride. We just want to keep it going now."

Against the Jets on Sunday, the Knights again produced another fiercely determined performance, embodied by a defiant display from goaltender Marc-Andre Fleury who stopped 31 of 32 shots.

Jets defenceman Josh Morrissey carelessly turned over possession under pressure from Joel Armia, with his pass deflecting into the path of Knights forward Alex Tuch who rammed home the opener for 1-0.

Morrissey made amends for his error with 2min 47sec left in the first, his long-range effort flying into the roof of the net to make it 1-1.

Luca Sbisa then helped the Knights take a 2-1 lead in the second period, with his shot from distance deflecting off Reaves to silence the home crowd at Winnipeg's Bell MTS Place arena.

The Knights then produced a superb defensive performance in the face of relentless Winnipeg pressure in the third to close out a famous victory.

"The whole mentality of this team is next man up," Reaves said. "We've got a deep team, we've got a lot of good players.

"You look at the season this team had even before I got here, everybody's stepping up. The guys that weren't playing, myself included, we stayed ready."

While the Knights celebrated, the defeat ensured Canada's long wait for a Stanley Cup crown will continue.

The spiritual homeland of ice hockey has now not won the Stanley Cup for 25 years, with the Montreal Canadiens the last team to win the coveted NHL crown in 1993.

"It just seemed like every time we grabbed some momentum, they took it," Jets forward Blake Wheeler said of the Knights.

"You have to give them a ton of credit for doing that. It's the sign of a good team."