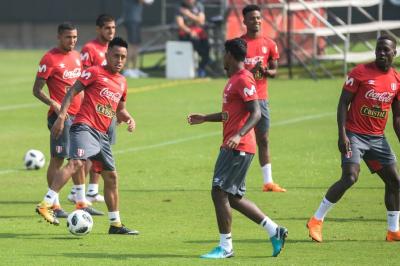 The 34-year old Peru captain already has the backing of Peru's President Martin Vizcarra and now Advincula wants God on his side too.

The right-back gave a press conference in Lima when he led hundreds of fans in the "Our Father".

"If there's a sliver of hope, we're all going to cling to it," Advincula said.

Guerrero was slapped with a 14-month ban last Monday by the Court of Arbitration for Sport (CAS) in Switzerland over a positive cocaine test and will miss the June 14-July 15 World Cup in Russia.

Vizcarra said Wednesday that Guerrero would file an appeal with the Swiss Federal Court to fight the ban.

Guerrero and the president of the Peruvian Football Federation, Edwin Oviedo, were to travel to Zurich on Sunday for a meeting on Tuesday with FIFA president Gianni Infantino.

"I hope God wants this meeting he will have with the president of FIFA to be positive and that he'll make the World Cup," Advincula told reporters.

"The group is with him. He is the captain of the national team and we want to have a great World Cup, that's our hope," Peru's right-back said.