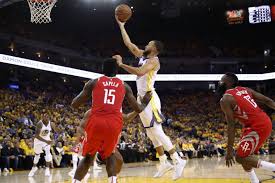 OAKLAND, United States, May 21, 2018 (BSS/AFP) - Stephen Curry silenced his critics with a 35-point display as the Golden State Warriors thrashed the Houston Rockets 126-85 to take a 2-1 series lead in the NBA Western Conference finals on Sunday.

Curry, targeted relentlessly by Houston as the Rockets levelled the series in game two, overcame a sluggish first-half display to lead a Warriors blowout in game three.

The two-time NBA Most Valuable Player exploded for 18 points alone in a devastating spurt of scoring in the third quarter that took the game away from Houston.

The reigning champion Warriors now have the opportunity to take a commanding 3-1 lead with a further victory in front of their home fans in game four on Tuesday as they chase a fourth straight NBA finals appearance.

Curry was relieved to have rediscovered his scoring touch, even if he had been unfazed by the criticism of his game two performance.

"That's what I expected to do," Curry said afterwards. "My approach to every game is the same -- you don't get too high on the highs, or too low on the lows.

"I'm just thankful I managed to hit some shots tonight, eventually. But there's a long way to go. I'm just going to stay focused on that."

Warriors coach Steve Kerr meanwhile said he had never doubted Curry even after a shaky first half display.

"We've seen this so many times with Steph," Kerr said. "All it takes is one. I was never concerned. This guy's a two-time MVP and he bounces back from bad games as well as anybody I've ever seen. It didn't surprise me."

The win was a record 16th straight playoff victory at home for the Warriors at Oracle Arena. Perhaps more significantly, the 41-point margin of defeat was Houston's heaviest in a playoff game.

Rockets coach Mike D'Antoni admitted his team had been battered -- but insisted they could recover.

"They gave us a haymaker and we went down," D'Antoni said. "We've got short memories, it's 2-1. We've got to get one up here and this next one we've got to go get it.

"We played soft, actually, and you can't do that with these guys."

As well as Curry, every other Warriors starter made double figures, with Kevin Durant finishing with 25 points and Klay Thompson 13.

The Warriors had edged into a nine-point lead in the first quarter, building momentum steadily to go 31-22 clear.

While Curry had a slow start to the night, making just one of seven three-point attempts in the first half, Durant gradually began to impose himself.

The towering forward had 15 points in the first half, and pushed the Warriors' lead to 54-41 with just under 30 seconds left in the half.

Durant was in the thick of the action early in the third quarter, as the Warriors stitched together a trademark burst of scoring.

Eight unanswered points suddenly saw the Warriors jump into a 21-point lead at 64-43.

The Rockets responded bravely to the onslaught, going on a 10-2 run to slash the home side's lead to 13 points.

But just when it looked as if the Rockets were hauling themselves back into contention, the Warriors exploded with a 13-0 run that saw them surge into a 27-point lead.

Curry was the architect, suddenly finding his range and raising the roof with a three-pointer past the covering Harden followed by an impish one-handed layup to make it 80-56.

From there it appeared the only question to be settled would be the margin of victory, but the Warriors showed no inclination to ease up, with Quinn Cook adding 11 points off the bench in five minutes.