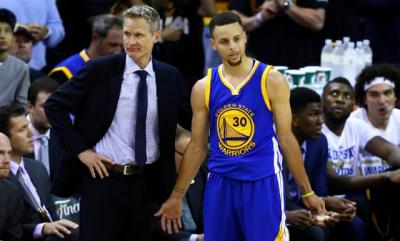 LOS ANGELES, May 21, 2018 (BSS/AFP) - The Golden State Warriors' 126-85 demolition of the Houston Rockets on Sunday was an NBA record-setting 16th straight home playoff win, but the Warriors won't take time to celebrate the milestone.

But head coach Steve Kerr said the Warriors couldn't afford to think about that kind of history with game four against the Rockets looming on Tuesday.

"We're in the middle of a hell of a run, obviously," Kerr said. "We've got great players who are committed, they take a lot of pride in protecting our home floor.

"I'm really proud of them, of what they have accomplished over the last few years. But make no mistake about it, game four will be incredibly difficult.

"We know what's coming so we're not playing any attention to that stuff. We've got to be ready for the force that's coming from them in game four."

The Warriors lead the best-of-seven series two games to one.

Their massive victory over the Rockets -- who led the league with 65 regular-season wins -- owed a lot to a breakout game for Stephen Curry.

The two-time NBA Most Valuable Player, who missed the first round as he continued to recover from a sprained knee ligament that sidelined him for 16 games, produced his first 30-point game of the 2018 post-season with 35 points.

Kerr wasn't surprised to see his superstar bounce back.

"He's under-rated for the toughness factor," Kerr said. "You don't become two-time MVP just by shooting a bunch of threes.

Curry and the rest of the Warriors will need to keep the pressure on in game four against a Rockets team that will be desperate to level the series before it heads back to Houston.

"It's a huge game, it's kind of a swing game of the series," Kerr said. "We're right where we want to be but we're not naive enough to think what happened tonight is an indication of what will happen in a couple of days."