BNP looks for not participating in next election: Quader 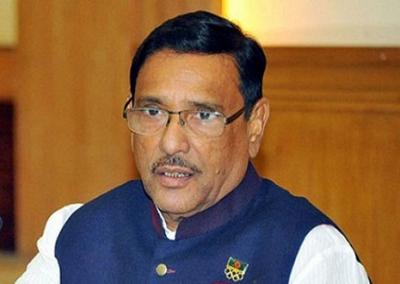 DHAKA, May 18, 2018 (BSS)- Awami League General Secretary and Road Transport and Bridges Minister Obaidul Quader today said after suffering a defeat in the Khulna City Corporation (KCC) polls by a wide margin BNP is now looking for different ways not to take part in the upcoming general election.

"Not only in Khulna City Corporation, they were defeated in the Bar Council election...Now, they are looking for different ways not to take part in the next parliament election," he said, speaking at the biennial conference of Bangladesh Puja Udjapan Parishad at the auditorium of Engineers Institution here.

Quader said granting bail to BNP Chairperson Begum Khaleda Zia by the court proved that there is rule of law in the country.

The AL general secretary said the people of the country would decide who will be in power.

Referring to AL delegation's recent visit to India, Quader said "We discussed different issues of common interest with Indian Prime Minister Narendra Modi and I hope that the Teesta Water sharing agreement will be signed soon."