35,000 families become self-reliant through 'One House, One Farm' 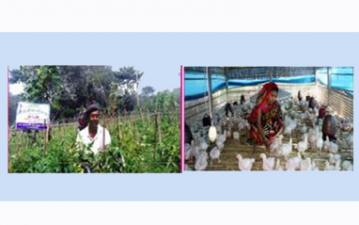 Talking to BSS, Project Director of Ekti Bari, Ekti Khamar project Akbar Hossain said the government undertook the project to expedite economic development in rural areas through providing financial support so that poor people can get involved in various income-generating activities, which eventually will help them come out of the cycle of poverty.

He said under the project, a total of 73,461 Village Development Samity (VDS) have been formed across the country, in which 35,10,542 families have been made members. The total amount of savings of the members now stands at Taka 1291.20 crore.

The goal of the EBEK project is poverty alleviation through e-financial inclusion (i.e. fund mobilization) followed by family farming livelihood and income generation of the under privileged and smallholders of the country.

Currently the project is being implemented in 485 upazilas, 4,503 unions and 40,527 villages across the country. The Ministry of Cooperatives and Local Government, Rural Development and Co-operatives (LGRD) is working to implement the project all over the country.

Prodip Kumar, Amtoli Upazila project coordinator said, "Through its Ekti Bari Ekti Khamar project, the government has been successful in alleviating poverty from the country's rural areas. Under the project, a total of 7,380 families of Amtoli upazila have received financial benefit and more families will be brought under the project in future."

While visiting Kalibari village under Amtoli upazila of Barguna district this correspondent found that many people particularly women came out of poverty with the support of the 'One House One Farm' project.

"As my savings have increased, I invested the money in cultivating vegetables and rearing cows. This eventually changed my fate and I became self-reliant," he added.

Halima Begum, another member of the Kalibari VDS, said she and her husband along with the children were in hardship only a few years ago.

"Things started to change after I started to set up a cattle farm by taking loans from the VDS under Ekti Bari Ekti Khamar Project. I have overcome my financial hardship and now I can send my two boys to school," she said.

Syed Ali, EBEK project coordinator of Satkhira Zila, said initially the project was undertaken in seven upazilas under Satkhira district in the 2009-2010 fiscal year. However, the project was launched with a new dimension during the fiscal 2011-2012. Though it primarily started with only 8,400 members, currently the number of members under 78 unions of seven upazila is 70, 068 thousand.

He said the EBEK project has brought a remarkable change in the development of the country's rural economy. The project will significantly change the living standard of the thousands of poor people, and small and marginal farmers in rural areas all over the country.

According to Magura Zila Rural Development Board (BRDB), under the PM's One House, One Farm Project, a total of 27,309 families under 36 unions of Magura district were benefited through 600 cooperatives of the project from July, 2009 to April, 2018.

Under Magura Zila, a total of Taka 40.6 crore were given as loan to the beneficiaries of the project. Each beneficiary saved Taka 200 per month which made the total savings amount reach Taka 11 crore. Besides, as part of the project Taka 20 crore, 80 lakh and 24 thousand have been given as donation from the government.