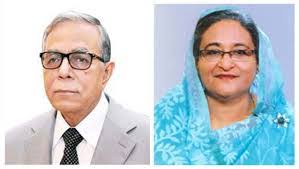 DHAKA, May 19, 2018 (BSS) - President Abdul Hamid and Prime Minister Sheikh Hasina today called for ensuring accuracy in weights and measures as per the International System of Units (SI).

They made the call in separate messages on the eve of World Metrology Day-2018.

Describing this year's theme of the day "Constant Evolution of the International System of Units" as time-befitting and perfect for global trade, they wished the day's programmes a success.

President Abdul Hamid, in his message, said World Metrology Day is celebrated every year commemorating the signature of the Metre Convention on 20 May 1875 in Paris.

The metrologists across the world are working for further ensuring accuracy of International System of Units (SI) and to change the definitions of different units of the system, he added.

He expressed his hope that the observance of World Metrology Day will play an important role to create public awareness about the significance of metrology in ensuring accuracy in weights and measures.

Prime Minister Sheikh Hasina, in her message, said if same international units can be ensured in measurements at every stage of production from purchasing raw materials to selling products, it will ease trade and commerce.

She said National Metrology Institute of every country is working coordinately in this regard.

The premier underlined the need for bringing some changes in important units of international system of weights and measures to ensure further accuracy.

The evolution will play an important role in the field of scientific innovations and technology based industries and to ease international trade, she added.

The Prime Minister expressed her optimism that metrology division of Bangladesh Standards and Testing Institution (BSTI) will ensure proper use of international units of weights and measures with the utilization of modern technology.