Vote for boat in next polls: Shahriar 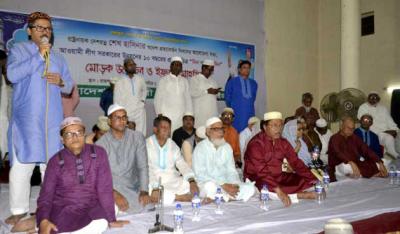 RAJSHAHI, May 20, 2018 (BSS) - State Minister for Foreign Affairs Shahriar Alam, MP, here called upon the people to vote for Awami League in next polls.

'Bangladesh will be turned into a safe haven for corrupt people, terrorists and militants if BNP and its cohorts come to power again,' he added.

The state minister was addressing a meeting at a city community centre yesterday afternoon as the chief guest.

Alam urged all party leaders and workers to be united in the electioneering for victory of boat. He said there is no alternative to win in the RCC election to triumph in all seats of greater Rajshahi in the next general election.

The state minister said Awami League is the only party which represents the people of Bangladesh. The party has brought nation's independence through a long struggle led by Father of the Nation Bangabandhu Sheikh Mujibur Rahman. The party will also bring economic emancipation of the people, he added.

Bangladesh would be economically self-reliant if Awami League remains in power, he also added.