Advancement of democracy to continue: Quader 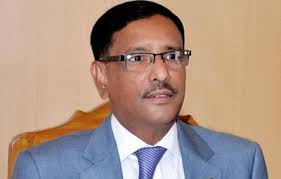 DHAKA, May 20, 2018 (BSS) - Awami League General Secretary and Road Transport and Bridges Minister Obaidul Quader today said the advancement of democracy will be continuing in the country and the next general election will be held as per constitution whether the BNP joins it or not.

"The next parliament elections will be held as per constitution whether you (BNP) take part or not. An inclusive election will be held if BNP takes part," he said, speaking at a discussion at Mohanagar Nattyamancha in city's Gulistan area.

He said an effective understanding is not possible between Awami League and BNP.

The AL general secretary said BNP has liberty to participate in the upcoming national polls. The election must be held in time in accordance with the constitution.