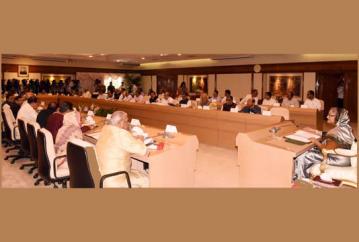 DHAKA, May 21, 2018 (BSS)- The Cabinet has given final approval to the draft of the Housing and Building Research Institute (HBRI) Act, 2017.

The approval was given in the weekly meting of the cabinet held at Prime Minister's Office (PMO) with Prime Minister Sheikh Hasina in the chair.

The new law will replace an ordinance framed in 1977 during military regime, cabinet secretary Md. Shafiul Alam said while briefing reporters after the meeting.

The institute has been established aimed at conducting scientific and technical research on designing and construction of the building as well as construction materials and other related problems related to housing.

The act proposed to constitute a 20-member board of directors for institute headed by the minister for housing and public works and state minister/deputy minister/secretary as vice-chairman. The institute will also have an Executive Committee headed by its Director General as president and four officials as members.

Under the policy, the cabinet secretary said, ministers, state ministers and secretaries would get Taka 75,000 for purchasing android mobile phone set with entitlement of unlimited mobile bill.

Under the policy, government officials of joint secretary level and above would get monthly mobile allowance of Taka 1,500 which is now Taka 600.

The cabinet also gave directives to provide telephone facilities to the judges of the Supreme Court according to the policy.

Under the policy Chief of Protocol of the Ministry of Foreign Affairs would also get international roaming facilities, the cabinet secretary said.