Next poll has no relation with Khaleda's release: Hasan 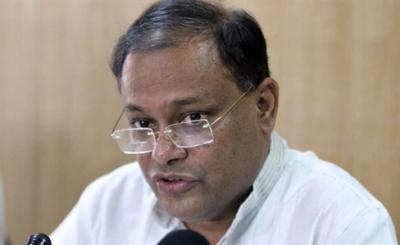 DHAKA, May 21, 2018 (BSS) - Awami League Publicity and Publication Secretary Dr Hasan Mahmud today said the next national election has no relation with the release of BNP Chairperson Begum Khaleda Zia.

"She (Begum Zia) is not a prisoner of state . . . She is the convict of a graft case," Dr Hasan said while speaking at a human chain held in front of Jatiya Press Club here. Awami Muktijouddha Projanma League organised the human chain protesting the atrocities in Palestine.

Hasan, also the chairman of the parliamentary standing committee on the Forest and Environment Ministry, said Jatiya Party Chairman HM Ershad took part in the polls while he was in jail, so it would not be a problem for Khaleda Zia to participate in the next polls.

Criticising the role of BNP leaders and activists centering the issues of their chairperson Begum Zia and Tareque Rahman, the AL leader said BNP should refrain from keeping busy with their cases as issues, rather they should take preparation for the next polls.

Dr Hasan categorically said, "No party has any scope to elect uncontested in the next polls as many political parties are ready to take part in the parliamentary election."

He confidently said the Awami League and Prime Minister Sheikh Hasina, at present, are much stronger than that of in 2014 and the incumbent government has brightened its image globally.

The AL always strongly raises strong voice against the mass killings in Palestine, he added.

Hasan claimed that BNP-Jamaat alliance did not protest it, though the BNP used to use the name of Islam during the polls time and do business with the religion.

The AL leader urged mass people to remain alert against the role of BNP- Jamaat in the upcoming elections.