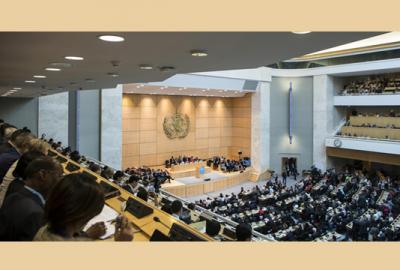 GENEVA, Switzerland, May 21, 2018 (BSS) - The 71st World Health Assembly began today with the aim to overcome barriers to ensure universal health coverage of the mankind across the world.

Swiss President Alain Berset officially inaugurated the WHO assembly at the UN building in Geneva.

The assembly is scheduled to be held from May 21 to 26. Heads of 194 member states and governments along with health ministers and officials concerned are taking part in the assembly.

A committee was formed at the opening session, to conduct the six-day assembly.

WHO Director General Dr Tedros Adhanom Ghebreyesus delivered the main speech at the assembly. Later, representatives from member countries highlighted the condition of the health sector of respective countries.

On the first day, participants emphasized on implementing health protection programmes in all countries.

Health ministers and other delegates from 194 member states of WHO will meet to discuss a series of issues, including the 13th General Programme of Work, which is WHO's 5-year strategic plan to help countries meet the health targets of the Sustainable Development Goals (SDGs).

The World Health Assembly is the decision-making body of WHO.

The main functions of the World Health Assembly are to determine the policies of the Organization, appoint the Director-General, supervise financial policies, and review and approve the proposed programme budget. The Health Assembly is held annually in Geneva, Switzerland.