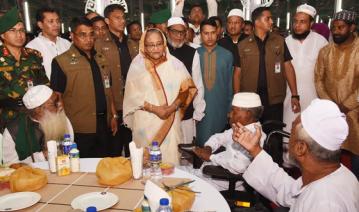 The Prime Minister went round different tables set for the guests, exchanged pleasantries with them and enquired about their well-being.

Eminent alems and ulema of the country's different mosques and madrasas joined the iftar.

Before the iftar, a special munajat was offered seeking continued peace, progress and prosperity of the nation.

Prayers were also offered seeking eternal peace of the departed souls of Father of the Nation Bangabandhu Sheikh Mujibur Rahman, Bangamata Fazilatunnesa Mujib and other martyrs of the August 15, 1975.