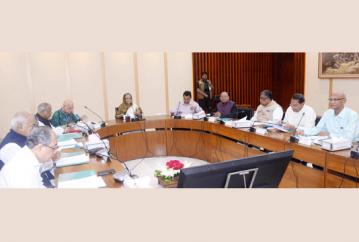 Dhaka, May 22, 2018 (BSS) - The Executive Committee of the National Economic Council (ECNEC) today approved the Fourth Primary Education Development Programme (PEDP-4) involving an estimated cost of Taka 38,397.16 crore in a bid to further strengthen the base of primary education.

The approval came from the 24th ECNEC meeting of the current fiscal year (FY18) held at the NEC Conference Room in the city's Sher-e-Bangla Nagar area with ECNEC chairperson and Prime Minister Sheikh Hasina in the chair.

"Of the total project cost, Taka 52,685.05 crore will come from the state exchequer, Taka 328.55 crore from respective the organization's fund while the rest of Taka 43,221.17 crore from project assistance," he added.

Of the approved 16 projects, 12 projects are new while the rest four are revised projects.

The Planning Minister said the Directorate of Primary Education under the Ministry of Primary and Mass Education will implement the PEDP-4 by June 2023.

Of the overall outlay of Taka 38,397.16 crore for the project, the government will provide Taka 25,591.57 crore while the rest Taka 12,805.59 crore will come as project assistance from World Bank, ADB, Jica, EU, DFID, Australian Aid, Canadian CIDA, Swedish CIDA, UNICEF and USH loan.

The Planning Minister said apart from gaining successes in human resource development, attaining MDGs and raising per capita income, the government is also putting emphasis on primary education as around 97 percent of eligible children are now going to primary schools.

"There is a need to further strengthen the base of primary education to keep up the pace of human resource development as this sector needs continued and further investments," he added.

According to the Development Project Proposal (DPP), there has been a significant development in primary education due to the farsighted steps taken by the government.

The Planning Minister said Prime Minister Sheikh Hasina has asked the authorities concerned to put emphasis on teaching foreign language like English at primary level apart from Bangla. Sid by side, she also underscored the need for disseminating knowledge on basic traffic rules to the children at the primary level.


The ECNEC meeting also approved the Padma Bridge Rail Link (1st revised) Project with an overall estimated cost of Taka 39,246.80 crore to be implemented by June 2024.

Bangladesh Railway under the Ministry of Railways will implement the project on G to G basis with Taka 21,036.69 crore loan from the Chinese Exim Bank. The project aims to set up rail link from Dhaka to Jessore through the Padma Multipurpose Bridge Project.

Regarding the approval of Establishing Effluent Treatment Plants at 14 state-owned sugar mills project with Taka 85.10 crore, the Planning Minister said Prime Minister Sheikh Hasina has asked the authorities concerned to utilize these sugar mills as refinery for refining imported raw sugar at the time when those are not in production.

Besides, the Prime Minister also put emphasis on cultivating sugar beets at the nearby areas of the sugar mills and thus produce sugar from those beets.

The rest of the approved projects are Construction of Multi-storey (13-storey) Residential Flat Project for public servants with Taka 168.52 crore, Installation of Pillars on Banks of the Buriganga, the Turag, the Shitalakkhya and the Balu Rivers, Protection of the River Banks, Construction of Relevant Infrastructures including Walkway and Jetty (2nd phase) Project with Taka 848.55 crore, Development of Important Infrastructures of 19 Municipalities Project with Taka 612.13 crore, and Extension of Dhaka City Drainage Network and Development of Canals Project with Tk 550.50 crore.