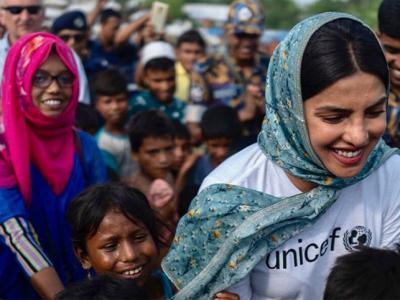 From Hariyakhali, she went to Ledha, one of the biggest Rohingya refugee camps in Teknaf, where she visited a child development centre established by UNICEF. Later, she visited the camp in Unchipra area.

Wrapping up her today's programme, she returned to Royal Tulip hotel at 11.30 am. She has been staying in this hotel since Monday.

Priyanka will visit other Rohingya camps on Wednesday as well and is scheduled to return to Dhaka on Thursday, Additional Police Super Afrazul Haque Tutul said.

Around 700,000 Rohingyas have fled violence in the Rakhine state of Myanmar and arrived in Cox's Bazar since August 2017, according to the UN.