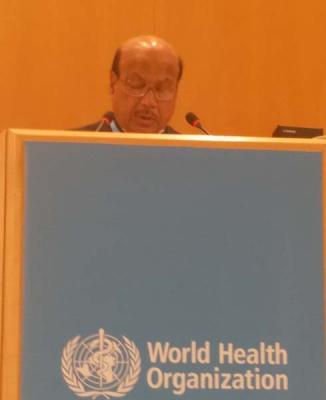 GENEVA, Switzerland, May 22, 2018 (BSS) - Health and Family Welfare Minister Mohammed Nasim has said Bangladesh is committed to achieve universal health coverage (UHC) and access to quality healthcare for all in accordance with 2030 global agenda.

"We praise the World Health Organisation (WHO) for bringing the UHC as the core theme of the 71st World Health Assembly (WHA)," he said while addressing the 71st WHA here today.

This project has introduced health insurance in order to bring equity and offset risk of falling into poverty by reducing the share of out of pocket expenditure, Nasim said.

Mentioning that Bangladesh has achieved eligibility of being a developing country this year, the minister said the country has set Vision-2021 to emerge as a middle income one to realise Father of the Nation Bangabandhu Sheikh Mujibur Rahman's dream of Sonar Bangla (Golden Bangladesh) with a knowledge-driven digital health system emphasizing on achieving UHC.

"We have combated communicable diseases and reduced child and maternal mortality, ensured high immunization coverage with extended primary, secondary and tertiary healthcare in both public and private sectors," Nasim said.

He added: "Under the leadership of Prime Minister Sheikh Hasina, we have ensured doorstep service through 14,000 community clinics using life course approach and community ownership."

Mentioning nutrition is one of the prime elements of Sustainable Development Goals, the minister said, "Bangladesh therefore urges to keep nutrition as one of the WHO's priority agenda and enhance investment on nutrition as a tool of achieving UHC".

Bangladesh has set an example in addressing health emergencies of one million forcibly displaced Myanmar citizens, who took shelter in the country's southern district Cox's Bazar, with the technical support from partners especially WHO, the minister said.

To address the global shortages of and access to medicine and vaccines, Bangladesh can contribute effectively through producing low cost high quality medicines and vaccines, he said, adding, "We are ready to cooperate with WHO and global initiatives in this regard".

"We will certainly overcome our challenges of health collectivity by mobilizing our resources and utilizing science-based knowledge and prudence," he said.

Earlier, the 71st World Health Assembly began on Monday at the UN building in Geneva with the aim to overcome barriers to ensure universal health coverage of the mankind across the globe.