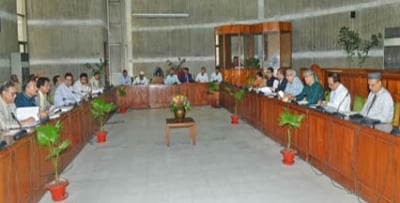 DHAKA, May 22, 2018 (BSS) - Media leaders here today said the proposed Digital Security Act (DSA) will not go against the mainstream media anyway rather it will help safeguard the media.

"We had a very fruitful meeting with the parliamentary standing committee. We have reached a consensus that we have to remove all the obstacles to free journalism from the proposed Digital Security Act," daily Samakal editor Golam Sarwar told reporters after a meeting of the parliamentary standing committee on the Posts, Telecommunications and ICT Ministry.

"One is that the government should not formulate any law that hinders the process of expressing people's opinion, and the other issue is that no such provision shall be there in the act, which can reduce the freedom of media," he said.

"We have expressed our opinion about eight provisions of the proposed act. The journalist community wants such a law which checks digital crimes, but we don't want the misuse of the law. We want the involvement of Bangladesh Press Council while applying the act against any journalist," Bulbul said.

Association of Television Channel Owners (ATCO) president Salman F Rahman said: "We have discussed the problems we found in the proposed act and the parliamentary body assured us of taking necessary amendment in this regard."

Posts and Telecommunications Minister Mostafa Jabbar said all participants of meeting agreed that the Digital Security Act should be applied only for tackling digital crimes, not for curbing the freedom of media or creating obstacles to journalists.

Law, Justice and Parliamentary Affairs Minister Anisul Huq said the meeting discussed eight provisions of the proposed act and all of them agreed that some words of the act should be defined.