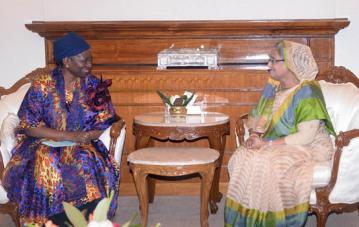 DHAKA, May 23, 2018 (BSS)-Prime Minister Sheikh Hasina today said local people have given their overwhelming support to the government's steps giving shelter to displaced Rohingya citizens of Myanmar in Bangladesh.

She said this when visiting UNFPA Executive Director and UN Under Secretary Natalia Kanem called on the PM at her Tejgaon office here today.

The premier told the UNFPA official that her government has given shelter to Rohingyas on humanitarian grounds as the people of Bangladesh have the experience of sufferings such a displacement.

"And, local people of Bangladesh are extending their wholehearted support to the Rohingyas," she said.

Sheikh Hasina said the Rohingyas are staying in the shelter centers in a very inhumane condition though the government is making constant strides to give them some comfort.

Everyday 60 babies are born in the refugee camps and the monsoon may cause untold suffering to them, she said.

Sheikh Hasina said about one lake refugees would be shifted to Bhasan Char camp very soon where they would be able to live in a better environment.

She assured the prime minister of continued support of the UN organization in various sectors.

Prime Minister Sheikh Hasina highlighted her government's priority to ensure development of the country from the grassroots level, the press secretary said.

Sheikh Hasina said her government is striving for ensuring food security, healthcare and education of the people from the grassroots.

The government is following the footprint of the Father of the Nation who soon after independence had initiated to bring the womenfolk into the mainstream of national development, she said.

The annual development programs (ADP) of the country has been prepared with focus on rural development, she added.