US$20,000 project underway to protect Rohingya from flooding 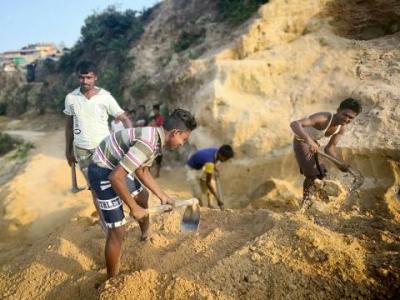 DHAKA, May 23, 2018 (BSS)- A major canal dredging and renovation project is underway to protect local residents and Rohingyas in Cox's Bazar from impending monsoon floods.

Under the US$20,000 project, over nine kilometres of abandoned canals are currently being dredged and renovated in Ukhiya to safeguard hundreds of thousands of people in Cox's Bazar ahead of heavy monsoon rains and the cyclone season, according to a release of International Organization for Migration (IOM).

IOM has employed 50 labourers from Hakimpara village of Ukhiya to carry out the work, which is part of a wider disaster preparedness programme supported by IOM.

The project will help reduce the risk of flooding in Hakimpara and neighbouring Jamtoli when the monsoon hits. It will also provide an opportunity to boost local agriculture, the IOM said.

"There was no water flow in the canal, as it hadn't been maintained for years. This resulted in flooding in the surrounding communities during the monsoon as the rainwater coming down from the adjacent hills couldn't flow through," said Damon Elsworth, IOM's Camp Coordination and Camp Management (CCCM) Operation Officer.

Local residents working on the canal clearing project said they felt happy to be working to protect their community.

"It feels good that we were consulted at every step of this dredging work. It feels like it is our property that we're working for," said Syed Kashem, 65, a local community leader overseeing the dredging work.

Almost 700,000 refugees have arrived in Cox's Bazar from Myanmar since late August 2017, putting a major strain on local infrastructure, said the IOM.