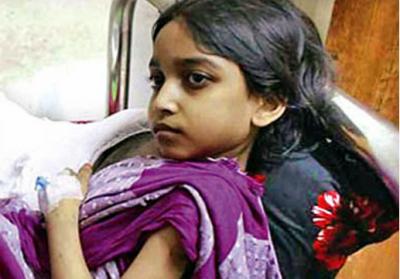 SATKHIRA, May 23, 2018 (BSS) - Muktamoni, an 11-year-old girl who was diagnosed with a malignant growth on her right arm, died in Satkhira this morning.

Fakir Ahmed, grandfather of Muktamoni, told BSS that she died at her residence in Kamarbaisa village under Satkhira Sadar upazila around 8am.

He said her health condition had been deteriorating for the last few days as the infection in her hand spread all over the upper portion of body.

Muktamoni grabbed attention of the entire nation as Prime Minister Sheikh Hasina took the responsibility of her treatment following publications and broadcast of reports over her deadly disease in a number of media across the country.

Muktamoni was under the observation of Dr Samanta Lal Sen, coordinator of Burn and Plastic Surgery Unit of Dhaka Medical College Hospital where she underwent treatment from July 11 to December 22 last year.

During the treatment, the girl underwent several surgeries on her right arm.

According to her father Ibrahim, a grocery shop owner, when Muktamoni was about 18-month-old, a wart appeared on her right arm. As the wart grew and began to hurt, her parents started to visit local doctors for her treatment.

"The disease was apparent when she was around only one and half years old but she was brought here at the last stage as her unprivileged parents were running the treatment," Dr Mahbubur Rahman of Dhaka Medical College Hospital (DMCH) told BSS after the hapless girl was admitted to the hospital.

Ibrahim also expressed his gratitude to the Prime Minister Sheikh Hasina and DMCH physicians for undertaking the responsibility of treating his daughter.