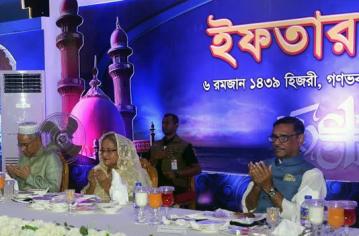 The Prime Minister went round different tables set for the guests, exchanged pleasantries with them and enquired about their well-being.

Judges of the Appellate and High Court divisions, secretaries of different ministries, Inspector General of Police Jabed Patwari, Attorney General Mahbubey Alam and ambassadors and high commissioners of the USA, the UK, India, Malaysia, Indonesia and other countries also joined the iftar.

Before the iftar, a special munajat was offered seeking continued peace, progress and prosperity of the nation. Maulana Ehsanul Haque conducted the munajat.