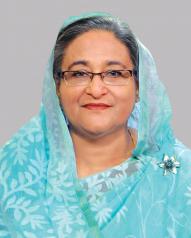 DHAKA, May 24, 2018 (BSS) - Prime Minister Sheikh Hasina leaves here for Kolkata tomorrow morning on a two-day official visit to India at the invitation of her Indian counterpart Narendra Modi.

During the visit, the premier will attend the Visva Bharati University Convocation at Shantiniketan as the guest of honour and will receive honorary Doctor of Literature (D.Litt) Degree from Kazi Nazrul University at Asansol in West Bengal.

Sheikh Hasina and Narendra Modi will jointly inaugurate the newly constructed Bangladesh Bhaban at Shantiniketan and hold a bilateral meeting there.

A Biman Bangladesh Airlines VVIP flight carrying the premier and her entourage members will take off from Hazrat Shahjalal International Airport here for Kolkata tomorrow morning.

After the reception at the airport, Sheikh Hasina will go to Shantiniketan near Bolpur in Birbhum district of West Bengal, approximately 180 km north of Kolkata by a helicopter.

After the inaugural ceremony of Bangladesh Bhaban, Sheikh Hasina and Narendra Modi will hold a bilateral meeting there. Issues of bilateral interest and international concerns are expected to come up for discussion.

On Saturday, the prime minister will go to Kazi Nazrul University at Asansol where she will be conferred with the honorary D. Litt Degree at a special convocation there.

Besides, veteran Indian actress Sharmila Tagore will also be honoured with D Litt, while renowned physicist SM Yusuf of Bhabha Atomic Research Centre will be conferred an honorary D Sc degree at the programme.

Mamata Banerjee will be present at the convocation as the chief guest while West Bengal Governor Keshari Nath Tripathi will address the ceremony as the chancellor.

From there, Sheikh Hasina will return to Kolkata in the afternoon and will visit Netaji Shubhas Chandra Bose Museum at Netaji Bhaban, the ancestral home of Netaji Subhas Chandra Bose, a great patriot of the freedom movement in India.