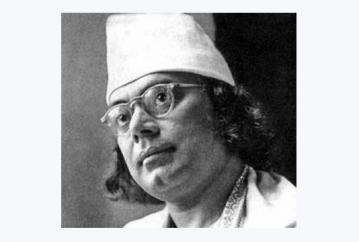 An elaborate programme has been taken at the national level to mark the day. Different organizations and cultural bodies in the capital and in districts will also celebrate the day amid various functions.

At the national level, the Cultural Affairs Ministry has taken massive programmes jointly in Dhaka, Comilla, Chattogram and the memorable place of the poet at Trishal tomorrow.

President Abdul Hamid will attend as the chief guest the birth anniversary programme of the national poet at the state level at Trishal at around 3.30pm tomorrow.

The programme of the day will begin with placing of wreaths by the people of all strata and the cultural affairs ministry at the poet's grave on the Dhaka University campus early in the morning.

At Trishal, Information Minister Hasanul Haq Inu and Religious Affairs Minister Principal Matiur Rahman will attend the inaugural session of the national level programme as the special guests. Chairperson of the Parliamentary Standing Committee of the Cultural Affairs Ministry Begum Simin Hossain Rimi will preside over the function.

The Nazrul Institute and the Shilpakala Academy will organize separate discussions and cultural functions marking the day. The birth anniversary of the national poet will also be celebrated at educational institutions and district headquarters across the country.

On the eve of the day, the Bangla Academy organized a discussion on Thursday at its Poet Shamsur Rahman seminar room. Professor Mohammad Abdul Quaiyum chaired the function.

In separate messages on the eve of the day, President Hamid and Prime Minister Sheikh Hasina prayed for the eternal peace of the poet's departed soul and wished success of all programmes marking his birth anniversary.

The President said in his message said that Nazrul Islam is a time-winning poet in Bangla language and literature.

He is known as the 'Rebel Poet' in Bangla literature and 'Bulbul' (nightingale) in the arena of modern Bangla song, the President said, adding that the poet's colourful life and creative works are sources of endless inspiration for all.

He noted that the time-winning creations are invaluable resources of Bangla literature and world literature as well.

"We got inspirations from his write-ups during every democratic movement, including the anti-British movement, language movement, mass upsurge of 1969 and the Liberation War," the President said.

In her message, the Prime Minister said Kazi Nazrul Islam was a poet of humanity, equality, and rebellion.

"He is the 'bulbul' (nightingale) of modern Bangla songs. He emerged in Bangla literature as a comet," she said.

Nazrul had multifarious talents. He is not only the rebel poet, but also a story writer, novelist, essayist, journalist, editor and translator at the same time, she added.

The Prime Minister said Nazrul was a symbol of non-communalism and nationalism and he was vocal against oppression and exploitation.

She said his songs and poems had encouraged anti-British movement in the subcontinent and later those had inspired people of Bangladesh during the War of Liberation. She recalled that Bangabandhu had brought the poet to Bangladesh from India and offered him citizenship.

She said the poet had a dream to establish a non-communal and discrimination and exploitation-free peaceful society.

"We've been working to establish this society," she added.

Nazrul was born on the 11th Joishtha in Bengali calendar year 1306 in Churulia, near Asansol in the Burdwan district of West Bengal.

He was famous for his fiery poem Bidrohi (The Rebel) and his many melodious songs. He was a poet, lyricist, musician, revolutionary and philosopher.

The nation got inspirations from Nazrul's poems and songs during the great Liberation War and all democratic movements and struggles.

There are 2,400 of his songs, and together, they are known as Nazrul-Geeti or Nazrul Sangit. He composed the songs, which he liked to tune himself.

Considering his impressive talent, Rabindranath Tagore dubbed him as Saraswati's bor-putra (the gifted son of the Goddess of learning).

Nazrul was the poet of rebellion against injustice and taboos. His nickname was Dhukhu Miah (Mr. Sorrow). True to his name, Nazrul suffered a lot in his life.

His father died in 1910 while he was still at school and he became the breadwinner of the family working for a bakery company, Wahid's, the most well known in north Bengal at that time.

Later, he resumed studies at Darirampur, Trishal, Mymensingh. But he left his studies to join the British Indian Army as a non-commissioned officer and was posted to Karachi. He left the army and settled in Kolkata, where he started publishing a fortnightly, Dhumketu (The Comet).

The magazine had a fiery tone and was critical of the British rule in India. He soon found himself in prison for publishing a poem written by him, "Anandomoir Agomon" (Advent of Goddess Durga-the Goddess of destruction of all evil).

In prison, he did not stop writing. He wrote, "Rajbandir Jabanbandi" (Deposition of a political prisoner). After a prolonged hunger strike, Nazrul was released from the prison. But throughout the '20s he found most of his work banned. After the death of his second son, Kazi Bulbul, the poet was sad. He wrote, "My nightingale sleeps forever."

Although known for his rabid criticism of imperialism, social and religious taboos, Nazrul also explored the themes of love, romance and devotion.

He also introduced a robust style that was very bold and innovative. His use of Persian and Arabic words in Bengali poetry also opened up new literary horizons. In the '30s, the leading gramophone company of India, HMV, as a lyricist, employed him full-time.

Later All-India Broadcasting Authority employed him. But his luck once again ran out and in 1942, he developed a rare neurological disorder that led to the loss of his voice and memory. Doctors in Vienna diagnosed it as Pick's disease.

After independence, Nazrul was declared the national poet and he was brought to Dhaka from Kolkata. He died here in 1976 and was buried beside the central mosque at Dhaka University. In his short articulate years, he also wrote and directed a play, Byathar Dan (The gift of pain).