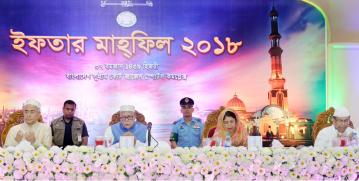 The President went round different tables set for the guests, judges, senior lawyers and other concerned of the SC and also exchanged pleasantries with them.

Before the iftar, a special munajat was offered seeking divine blessings for the continued peace, progress and prosperity of the nation.

Khatib of the Supreme Court Jame Mosque conducted the munajat.

Earlier on his arrival at the iftar venue, the President was received by Chief Justice Syed Mahmud Hossain and Law Minister Anisul Huq.