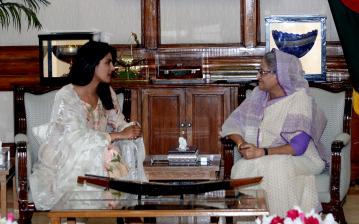 DHAKA, May 24, 2018 (BSS) - Celebrated actress and UNICEF Goodwill Ambassador Priyanka Chopra today said the world should learn from Bangladesh how to respond to call of humanity as she met Prime Minister Sheikh Hasina after her visit to Rohingya camps in Cox's Bazar.

"The world should learn from Bangladesh," a premier's office spokesman quoted her as saying during the call on as she appreciating Dhaka's response to the call of distressed humanity.

PM's additional press secretary Nazrul Islam said the Bollywood celebrity particularly praised Sheikh Hasina for shouldering the burden of over a million forcibly displaced ethnic minority population of Myanmar during her courtesy call on at the premier's Gonobhaban residence this afternoon.

He said Chopra, who visited the Rohihya camps for the second time in months, shared her comparative experience of interacting with the children there saying over the months they visibly overcame the trauma of violence they witnessed at their homeland.

"Earlier, when I visited the Rohingya camps I asked the children to draw a picture . . . they drew pictures of arms, gunfire and mortar shell from roving helicopters," Chopra said.

But, she said, "As I told them to do the same this time they drew pictures of sun, animals and nature" which Chopra called a "testimony of their inside healing",

"And it was possible due to your motherly shelter and security," Chopra told the premier.

PM's sister Sheikh Rehana and family members were present during the call on after her three-day visit to the Rohingya camps.


The Bollywood actress, however, feared the Rohingya children still were exposed to a hazardous situation in their camps while on behalf of the UN children fund she called upon international community to extend all out support for the Rohingyas.

Chopra arrived Bangladesh on Monday on a four-day visit to draw world's attention to the children of displaced Rohingya nationals of Myanmar living in the refugee camps in Cox's Bazar.

She told the premier that she was concerned about the possibility of a "generation loss" of a particular ethnicity as a large number of children have no access to education and passing their days roaming around.

"The children may go astray and even become extremists if they are deprived of the opportunity of having education,"Chopra feared.

The premier told Chopra her government gave shelter to the Rohingyas solely on humanitarian ground as people of Bangladesh experienced the same situation in 1971.

She also mentioned about her refugee life abroad after killing of her parents in 1975 saying those incidences taught us to stand beside humanity during their bad time.

Sheikh Hasina said her government has been making efforts to give the Rohaingyas all support, but it was not possible alone for Bangladesh to mitigate their sufferings and UNICEF and other international agencies should come forward with more support.

Pointing out the government's initiative to relocate the Rohingyas to a safe zone at Bhasanchar the premier they would be able to live there in a better atmosphere.

The cyclone-shelter like centers were constructed with many facilities, she said adding that there would have education and health facilities as well as employment opportunities, the prime minister said.

Mentioning about the signing of an agreement with Myanmar for repatriation of the Rohingyas to their homeland the Prime Minister said unfortunately Myanmar authorities was not working according to the agreement.