Cultural deficit will be overcome under Sheikh Hasina's leadership: Inu 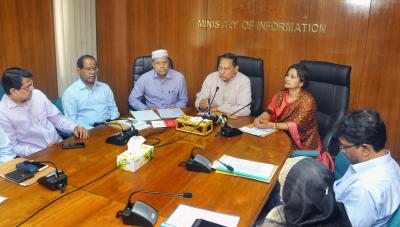 DHAKA, May 24, 2018(BSS)-Information Minister Hasanul Haq Inu, MP, today said that Prime Minister Sheikh Hasina had brought light to the world of culture and ethics where there was darkness under the rule of the preceding military, communal forces.

He was presiding over a meeting of the preparatory committee for national film awards to be held on July 8, 2018 at the conference room of the information ministry.

The meeting was also attended by advisor of the committee, State Minister for Information, Advocate Tarana Halim.

Speaking at the meeting Inu said the programme is being held at a time when Bangladesh has become eligible to graduate to a developing country from a least developed one and the country had entered into space.

"Therefore, the function, this year would be unique, "he said.

State Minister Tarana Halim said, "A different, modern, sophisticated and quality programme would be presented to the prime minister."