Dhaka-Delhi to continue trend of cooperation in future: PM 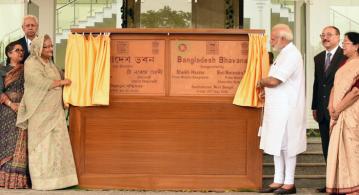 SHANTINIKETAN, West Bengal, May 25, 2018 (BSS) - Prime Minister Sheikh Hasina today called for full utilisation of mutual cooperation between Bangladesh and India and hoped that both the countries would continue this trend of cooperation in the future.

"The 'far beyond strategic relationship' between Bangladesh and India is often considered as a 'model of bilateral relation' for the rest of the world. So, we can firmly declare that both the countries will continue this trend of cooperation in the future," she said.

The premier said Bangladesh Bhavan in Shantiniketan would enhance the cultural bond between Bangladesh and India which would further strengthen bilateral relationship.

"This is a small piece of Bangladesh in Tagore's Santiniketan from where the spirit of Bangladesh will be reflected ... this spirit influenced by Rabindranath will be unique in its own way," she said

On the very outset of the programme, students in Santiniketan performed the national anthems of Bangladesh and India while the function began with playing song of Rabindranath "Anandaloke Mongolaloke".

Prime Minister's sister Sheikh Rehana and a number of dignitaries from both counties including litterateurs, academics, poets, singers and artistes were present.


Sheikh Hasina said as a neighbour Bangladesh wants to move together with India and in view of this all problems between the two countries have been resolved.

"However, we have still some problems unresolved which I don't want to raise here in the interest of congenial atmosphere of the inaugural function," she said.

"But, I firmly believe that any sort of problems can be resolved through friendly attitude," she noted.

"At present, cooperation between the two countries in various traditional and non-traditional sectors is increasing and multifaceted relationship of the countries has reached a new height in the last nine years," she said.

Sheikh Hasina expressed her firm optimism that Bangladesh and India will be able to achieve socio-economic development through full utilisation of mutual cooperation.

Sheikh Hasina said she believes that Bangladesh Bhaban will play a significant role in increasing the cultural exchanges and the people-to- people contact between the two countries.

"Bangladesh Bhavan will be a centre of excellence where students can study and conduct research on the glorious Liberation War of Bangladesh, Father of the Nation Bangabandhu Sheikh Mujibur Rahman, Rabindranath and history and culture of Bangladesh as well," she said.

As a citizen of Bangladesh, Sheikh Hasina said, she is overwhelmed at the establishment of 'Bangladesh Bhavan' on the premise associated with the memories of Rabindranath Tagore.

Bangladesh government spent about 25 crore rupees for the construction of this two-storied building, she said, and declared giving one-time corpus fund equivalent to Rs 10 core for the maintenance of the building and conducting its activities.

To facilitate the researchers, the building has a library, auditorium, cafeteria, museum with digital features, archive and other necessary amenities. Sheikh Hasina said Rabindranath kept Bangladesh close to his heart and although he was born in Kolkata, he spent a considerable time of his life in Patisar, Shilaidaha and Shahjadpur of Bangladesh.

"Rabindranath used to visit those places to oversee his zamindari, however, he was more concerned with the welfare of his poor subjects and he was always with them in their happiness and sorrows," the prime minister said.

Sheikh Hasina said Rabindranath observed closely the nature of the riverine rural Bengal and their agro-based society and created extraordinary songs, poems, novels and short stories in those places. In Patisar he established agro-cooperative and introduced microcredit initiatives.

Sheikh Hasina said her relationship with Visva-Bharati dates back quite a few years. Since receiving the 'Deshikottom' award from the institute in 1999, Sheikh Hasina said she was longing for a separate centre for Bangladesh Studies in Santiniketan.

Sheikh Hasina said Rabindranath is associated with all the stages of Bangladesh's freedom movement. In 1948, under the leadership of the then young student leader Sheikh Mujibur Rahman the Bengali nation started its struggle to keep intact the dignity of their mother tongue.

"Our struggle for independence originated in our language movement. In 1961, during the birth centenary of Rabindranath Tagore Pakistani ruling elite undertook a notorious move to ban the songs and works of Rabindranath. The people of our land stood against that conspiracy," she said.

"We struggled to uphold the spirit of Rabindranath in our heart. During our glorious Liberation War, Tagore Songs inspired us immensely and provided us with courage and strength," she said.

The premier said the greatest Bengali of all time Father of the Nation of Bangladesh Bangabandhu Sheikh Mujibur Rahman dreamt throughout his life to establish a poverty, hunger and exploitation free liberal society.

Like Tagore, she said, Bangabandhu Sheikh Mujibur Rahman also believed that the world will never prosper unless hostility is eradicated. Hence, he adopted, "Friendship to all, malice to none" as the Foreign Policy of Bangladesh.

Following his principle, she said, Bangladesh has built close friendship with all its neighbours particularly with India. Since ancient times, the people of these two land have shared common historical, social, linguistic, cultural and emotional bonds.

Sheikh Hasina said she personally is owed to the people of India as late Indian Prime Minister Indira Ghandi had given shelter to her and her sister Sheikh Rehana after killing of their parents on August 15, 1975. People of Bangladesh would remember this support forever.