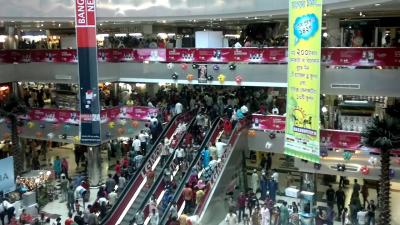 DHAKA, May 25, 2018 (BSS) - Law enforcing agencies have drawn extra security vigil during Ramadan in and around markets and malls here to ensure peaceful and unhindered shopping ahead of the Muslim's one of the biggest religious festival Eid-ul Fitr.

"We have taken special security arrangements in the capital marking the upcoming Eid. We have brought the shopping malls under stringent security arrangement by setting up CCTV cameras, archways and metal detectors on the entrances of different shopping malls. We are also on alert to check crimes like pick pocketing and mugging in the capital," Assistant Inspector General (AIG) of Police Soheli Ferdous told BSS today.

She said Dhaka Metropolitan Police (DMP) has also given special attention to shopping centre-based traffic system in the capital.

"Like previous years, we are providing money escort service in carrying big amount of money ahead of Eid. We are also introducing units of female police to ensure security in different malls. Special units of police will also be deployed to tackle eve teasing in the shopping centers," the AIG added.

According to the sources, Police Headquarters has directed all the metropolitan police, district police units and shopping centers owners to set up CCTV camera systems in the respective malls.

As a part of the precautionary measures, police has also directed to take money at different parts of the body, pocket, bag and the trusted accompanied persons with using comparatively big roads instead of lanes and by lanes in carrying huge amount money and be more careful while got stuck in jam or traffic signal,

Senior ASP of RAB Media Wing Mizanur Rahman Bhuiyan said they too has increased security vigil ahead of Eid, with extra patrolling, search operations and setting up of temporary check posts.

"Around two thousand RAB members will remain in service as striking force in the capital to ensure security in and around different shopping centers," he said.