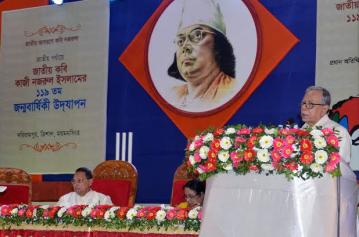 MYMENSINGH, May 25, 2018 (BSS) - President M Abdul Hamid today said the new generation will contribute to rebuild an exploitation-free and non- communal society being imbued with the patriotism and ideology of National Poet Kazi Nazrul Islam.

"Nazrul was not merely a national poet of Bengal, he was a poet of reawakening and equality . . . He was strongly vocal against exploitation, deprivation, repression, superstition and subjection," the President said while inaugurating the three-day national level programme at Trishal here marking the 119th birth anniversary of Nazrul.

Paying rich tribute to the memories of the national poet, President Hamid said Nazrul was born at Churulia village in West Bengal, but he spent most important time of his life at Darirampur village of Trishal here since 1914.

As poet of equality, the President said, Nazrul played immense role in reawakening Bangalies, raising voice for Independence, speaking against fanaticism and communalism through his talents, rich and valuable literary works, lectures, philosophy of his life and spreading human values. Nazrul visited different areas of east, north and south parts of Bangladesh several times and exchanged views with people of the then backward remote areas and created awareness of equity and patriotism.

"His literary works also inspired our Bangali people against the exploitation and deprivation of the then Pakistani ruler. Nazrul's patriotic and enthusiastic songs, poems helped gear up our movement during the Liberation War," Abdul Hamid, a war veteran, observed.

Calling Nazrul a poet of inspiration for the Bengali nation, the President said Father of the Nation Bangabandhu Sheikh Mujibur Rahman brought the poet along with his family members to the soil of Bangladesh showing due respect to him in 1972.

Simeen Hussain (Rimi), MP, chairman of the parliamentary standing committee on the Cultural Affairs Ministry, presided over the programme, followed by a cultural function.

Meanwhile, a series of programmes, including colourful rally, discussion and cultural function were taken marking the birth anniversary of the national rebel poet. Beginning at Darirampur Nazrul Mancha on May 25, the programme jointly arranged by the Ministry of Cultural Affairs and Mymensingh district administration will end on May 27.