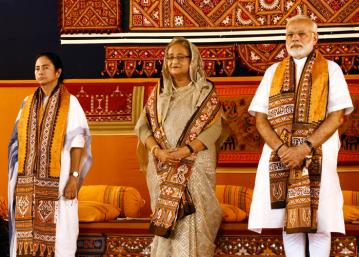 The prime minister arrived Kolkata this morning on a two-day visit at the invitation of Indian Prime Minister Narendra Modi.

Narendra Modi received Sheikh Hasina on her arrival at Rabindra Bhaban of Santiniketan, founded by Rabindranath Tagore in 1921 as a unique institution to impart education blending with nature, spirituality and human values.

Later, Sheikh Hasina joined the convocation of Santiniketan as the guest of honour, which is held in every five years.

Indian Prime Minister and Chancellor of the University Narendra Modi presided over the convocation.