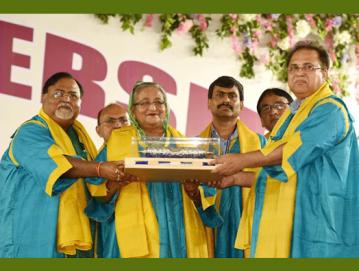 Vice chancellor of the university Sadhan Chakraborty presided over the convocation while Minister in Charge of Department of Higher Education of West Bengal government Dr Partha Chaterjee was the guest-of-honour.

Paying her tributes to national poet of Bangladesh Kazi Nazrul Islam, Sheikh Hasina urged everybody to rise above small interests and communalism and learn how to value people as human being as taught by Nazrul.

"As a member of human race, she said, everybody should uphold the values of humanity above all not only in his/her working place but also in every steps of life."

Sheikh Hasina expressed her immense pleasure for having the opportunity to come to the birthplace of Kazi Nazrul on his birthday and receive the degree from a university named after him.

"I think this honour is not only for me, but also the people of
Bangladesh," she said, extending thanks to the university authorities for the degree.

Sheikh Hasina said advent of rebel poet Nazrul in the sky of Bengali literature was just like a comet. Nazrul, who was a poet, litterateur, music composer, musician, singer, music director, dramatist, actor, journalist, editor and soldier, has filled the Bengali literature with precious treasures.


Pointing out the partition of Bengal by British rulers, the Prime Minister said though Bengal was divided but Nazrul remained undivided. As to why, we see universities founded after the name of Nazrul both in Bangladesh and West Bengal, she said.

The Prime Minister said the literary works of Nazrul always reflected the messages of secularism and humanity. Nazrul, on one hand, has written Islamic Hamd and Naat to reach the religious messages to common people in easy language, and on the other hand, the Shyama Sangeets and Vaishnava songs composed by him are unique creation to reach the messages of Hindu religion to commoners.

The music of Nazrul are also influenced by classical genre and have touch of folk songs. In some songs he added music of Middle East which manifests his wonderful genius in music.

Recalling the association of Nazrul with Bangladesh's Father of the Nation Bangabandhu Sheikh Mujibur Rahman, the Prime Minister said Bangabandhu met Nazrul in Faridpur at his early young age.

Bangabandhu has picked the 'Joy Bangla' slogan from the poems of Nazrul, she said adding that "the two short-lived figures have unique similarities in their characters. One was poet of literature while the other was poet of politics."

The Prime Minister said Bangabandhu and Nazrul in their thoughts and ideology were same and both of them dreamt for a secular society free from exploitation and deprivation. They didn't bow to autocratic rulers, rather served in jail.

Sheikh Hasina said Bangalee people are so fortunate that they have got two great poets like Rabindranath and Nazrul. They not only enriched Bengali literature but also brought positive change in our values and life.

"Bengali people possibly have got the mixture of softness and rebellion in their character from the two poets," she observed.

Sheikh Hasina said Nazrul was born in Churulia in West Bengal. But he wandered all over the Bengal. He passed his childhood in Trishal of Mymensingh.

Later, Nazrul joined in many literature conferences and political meetings in Bangladesh and lived in Comilla, Chittagong, Sirajgonj, Faridpur and other places and came in touch with local people.

Sheikh Hasina said Bangabandhu brought Nazrul to Dhaka in 1972 and took steps for his treatment and living in Bangladesh. Bangabandhu gave him the nationality and declared him as the national poet.

The famous song of Nazrul 'Chal Chal Chal/Urdhe Gogoney Baje Madal' was accepted as the war song of Bangladesh. After his death Nazrul was laid to eternal rest at Dhaka University premises, she said.

Sheikh Hasona said a number of institutions are conducting research on life and works of Nazrul in Bangladesh. Nazrul Institute has been established in the house in Dhaka where the poet passed his last days.

The institution is devoted for protection of the memories of the poet, conduct research on his life, literature, song and other literary works, collecting information about Nazrul and carrying out publicity and publication to highlight the image of Nazrul at home and abroad, the prime minister said. About Bangladesh's socioeconomic development the Prime Minister said Bangladesh was not so fortunate like India as far as democracy is concerned. Democratic journey of Bangladesh stumbled time and again since its independence.

Expressing her firm resolve to make Bangladesh as a prosperous nation, the prime minister said as neighbours Bangladesh and India will prosper together. There will have many problems between the neighbours. But, we should not be unset with those problems. We should think for welfare of the people, she said.

Sheikh Hasina said her government is making constant stride to ensure access to education for every people in spite of limitation of resources. She also laid importance on cooperation among the neighbouring countries to protect the youths from militancy, terrorism and drug.