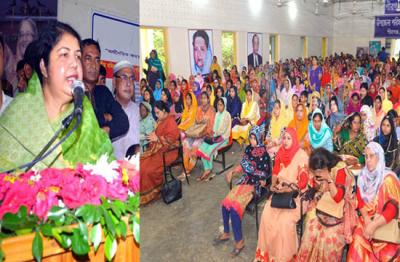 RANGPUR, May 26, 2018 (BSS) - Speaker of the Jatiya Sangshad Dr Shirin Sharmin Chaudhury, MP, here today said the skilled women could create their own workplaces to become self-reliant if they got opportunity.

"All of the women should be provided with necessary training to turn them into skilled human workforce for involving them with the mainstream of the economy for ensuring economic empowerment of the women," she said.

Dr Sharmin said this at a function held at Pirganj upazila parisahd auditorium to distribute stipends to 200 female trainee entrepreneurs on completion of their training on various trades as the chief guest.

The district unit of Jatiya Mohila Sangstha organised the function after providing training to the female entrepreneurs under the "Developing women entrepreneurs in economic empowerment project (3rd project).'

"If the women get the opportunity at the policy-making level, they will be empowered to play special role for contributing to the advancement of the society. If a woman becomes economically self-reliant, the society and state will be benefited," she said.

Dr Sharmin further said, "It has been proved that it is safe to disburse loans to the women. Because, they pay the loans by all means, remain debt free and do not become loan defaulters."

She said training is very important for developing successful women entrepreneurs and so why, the present government has taken various training programmes on sewing, catering, fashion design, beautification and other trades for the women toward the direction.

"Bangladesh will be able to stand on the stronger economic foundation if advancement of the women community could be ensured properly," Dr Sharmin said.

Later, the Speaker attended a memorial meeting organised by Pirganj upazila Awami League (AL) in memory of the departed leaders and workers of AL on Kochhimon Nesa Girls' High School ground as the chief guest.

The discussion was followed by a doa mahfil and Iftar party.

On the occasion, the Speaker said Islam is the religion of humanity and it shows the path to peace.

"The holy Ramadan teaches people to become pure through self-purification," she said and called upon everyone to take the real education of Ramadan to become humanitarian.