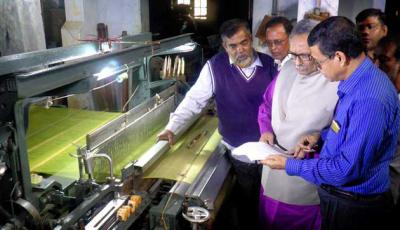 RAJSHAHI, May 28, 2018 (BSS) - A plan has been taken for setting up specialized economic zone in Rajshahi for elevating economic condition and eradicating unemployment problems through the best uses of existing agricultural potentialities.

Aiming at establishing agro-based industries, the zone will be set up on around 205 acres of land in Joykrishnapur, Maria, Balanagar, Bhobanipur and Koira areas under Paba Upazila of the district. The private-owned lands will be purchased in fair price.

Engineer Azharul Islam, Regional Director of Bangladesh Small and Cottage Industries Corporation (BSCIC), said small and medium enterprizes along with garments factories will be set up in the zone upon successful completion of its necessary process by 2019.

Muniruzzaman Moni, President of Rajshahi Chamber of Commerce and Industry (RCCI), said the zone will generate massive employment scopes besides attracting many investors towards establishing industries.

He said foreign investors will be encouraged here side by side with the local ones. Many of the foreign ones have contacted with us in this regard.


RCCI has requested the authorities concerned to set up small engineering and garments factories in the zone. "We have demanded 20 percent investment scopes for the women entrepreneurs," said Chamber leader Moni.

He mentioned that prospects of agro-processing enterprises is bright in the region as it produces surplus crops especially food-grains, fruits and vegetables.

Moni described 'value addition to agricultural products and agro- processing' as very much consistent with the government policy since due emphasis are being given on agro-processing at present.

Muhammad Ali Sarker, Chairman of Zila Parishad, said the region has now been fulfilling 52 percent of the country's total food demand along with supplying 76 percent raw-materials of the country's agro-based industries. "Unfortunately, there is not any big industrial unit here," he said.

Potato flakes have great international demand and its production technology is relatively simple and labour intensive. Besides, the region alone produces 49 percent of the country's total mango production and there is an ample opportunity for establishment of mango-based industries here.

AHM Khairuzzaman Liton, former Mayor of Rajshahi City Corporation, said economic zone is very important for bolstering economic condition of any region along with improving its living and livelihood condition.

He says the present government of Prime Minister Sheikh Hasina is very much positive towards strengthening Rajshahi's economic condition through proper utilization of the existing potentialities.

He hoped that the new economic zone scheme will be implemented within a shortest possible time.