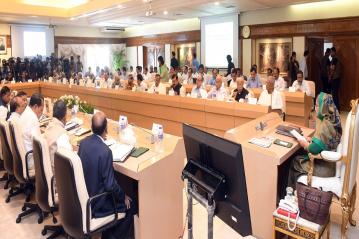 "The cabinet in its weekly meeting with Prime Minister Sheikh Hasina in the
chair . . . gave approval to the draft of the 'Community Clinic Health
Service Trust Act, 2018'," Cabinte Division's Secretary for coordination and
reform NM Ziaul Alam told a news briefing.

He added: "Once the law is passed all community clinics at the grassroots
would function under the trust which are now being operated under a project."

Alam said under the law the government would provide a one-time allocation
to the trust fund while the trust would collect as well funds from any
individual or organization and ensure proper use of the fund.

The existing number of rural-based community clinics is 13,861 which so
far provided healthcare service to 620.57 million patients while officials
said the government planned to elevate the number of these facilities to
14,890.

"The cabinet observed that the community clinics are playing very
important role in reaching the health services to the rural people across the
country," Alam said.

He said the draft law was actually placed before the cabinet for approval
in principal but considering the importance of the law the council of
ministers gave its final approval to the draft with some correction after
elaborate discussion.

Alam said the very objectives of the law were to ensure participation of
the people in the coordinated primary health service providing activities and
establish referral system with other hospitals for better treatment.

The new law suggested the health service providers to be made permanent
and they would get other benefits like regular government employees.

The secretary said under the law necessary rules would be enacted with
regards to enhancement of salary, gratuity, retirement allowances and other
benefits.

"The trust will have a national advisory council headed by the Prime
Minister and a board under the chairmanship of a renowned person to be
nominated by the Prime Minister," he said.

The 14-member board will have a managing director with the status of an
additional secretary or equivalent.

Apart from the community clinic issue, the meeting reviewed the quarterly
progress report on implementation of cabinet decisions for the period April
to June 2018.

According to the report 75 percent or 63 out of 84 decisions were
implemented during the period compared to 71.62 percent during the
corresponding period of 2017.

During the time, three policies were framed, eight laws were enacted in
parliament and two MoU were signed with other countries.

At the beginning of the meeting the Prime Minister unveiled the cover of a
book on the rare photographs and historical information on Father of the
Nation Bangabandhu Sheikh Mujibur Rahman's jail life.

Alam said the book titled '3053 Din' (tin hajar tipanna din) was published
under the auspices of home ministry's Security Services Division and
management of the Department of Prison.

The cabinet congratulated Bangladesh national cricket team for its recent
victory over West Indies in one day international series.