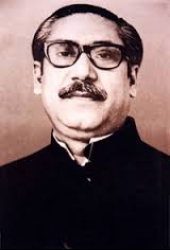 RANGPUR, Aug 14, 2014 (BSS) - Assassination of Father of the Nation Bangabandhu Sheikh Mujibur Rahman and most of his family members was aimed at reserving the hard-earned Independence and destroying spirit of the War of Liberation.

The people of Rangpur region, like the whole nation, were stunned and at a loss after listening the unbelievable radio broadcast about assassination of the most popular leader of Bengali Nation Bangabandhu by a group of unruly army men on August 15 in 1975.

"It is still very hard for me to believe that Bangabandhu might be killed on the just-liberated soil where the great leader spent every moment of his whole life for serving the purpose of the people," Taramon Bibi said with emotion.

Bangabandhu had engaged himself in restructuring the war-torn nation in spirit of the War of Liberation to realise his dream of building Sonar Bangla to make Independence meaningful for every citizen when he was assassinated.

She asked Prime Minister Sheikh Hasina for making Bangabandhu's dream successful through defeating culprits of the 1975 assassinations as well as the anti-liberation forces as the perpetrators destroyed fate of the nation by killing Bangabandhu.

Terming assassination of Bangabandhu is an irreparable loss for the nation, Bablu said the vested quarters, however, failed to realise their deep-rooted conspiracy and devil design of turning the just-liberated Bangladesh again into Pakistan.

Senior journalist Rafiq Sarker said the nation turned bemused at the assassinations of Bangabandhu and most of his family members on August 15 in 1975 when none could dare to lodge protest in fear of the perpetrators and conspirators.

Social worker Shahidul Islam said the pro-Pakistani assassins took control of the state power, frightened the people and put many freedom fighters and politicians into jail.

However, the people tried to bring out processions at places to protest the killing of Bangabandhu despite the fearful, suffocating and adverse situations created by the conspirators in the region as elsewhere in the country, he said.

Executive Director of Northbengal Institute of Development Studies Dr Syed Samsuzzaman said the post August 15 assassination situations did not allow the common people to organise themselves defying strong surveillance of the perpetrators.

The perpetrators launched a reign of terrorism through arresting the Bangabandhu lovers, freedom fighters and were spreading false propaganda against Bangabandhu to mislead the common people to create negative attitude towards him, he said.

Widow Kodevan Nesa, 77, said the perpetrators made the post August 15 situations so frightful that many Awami League leaders had to remain silent and some went against them who protested the killing only for the deep love for Bangabandhu.

President of Rangpur district unit of Jatiya Samajtantrik Dal Dr Ekramul Hossain Swapan said the perpetrators wanted to bury spirit of the War of Liberation through killing the architect of Independence Bangabandhu and his family members.

During the post August 15 assassinations, the common people had to remain indoors in silence though the military, paramilitary and police forces were patrolling the cities and towns imposing curfew for indefinite periods and many people were arrested, he said.

Vice-president of Rangpur city Awami League Shah Md Nabiullah Panna said the common people became wordless and cried silently after hearing the unbelievable news of assassination of Bangabandhu and most of his family members on August 15 in 1975.

Farmer Aminur Rahman, 70, and lawyer Ahsan Habib said the anti-liberation forces took advantage of the situation and distributed sweets among them to express their joyful feelings as many of them were released from the jails or returned from hideouts.

All of the interviewees urged the government to bring back all absconding killers of Bangabandhu and execute them as soon as possible to further safeguard the country's Independence and Sovereignty and free the nation from the stigma once for all.