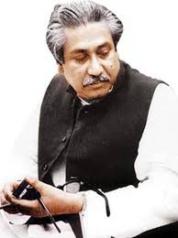 There are many other great personalities, who have also made
the similar remarks about Bangladesh's founding father
Bangabandhu Sheikh Mujibur Rahman. One of them is Ved Marwah,
former governor of Manipur and Jharkhand, India's two states.

He wrote in his remark while recounting his memory with
Bangabandhu ""I have met many charismatic personalities during my
service career, including Jawaharlal Nehru, Indira Gandhi, Rajiv
Gandhi and many world leaders, but I must say that among them he
(Sheikh Mujib) was the most charismatic personality I had ever
met."

Recalling Bangabandhu's historic meeting with late Indian
Prime Minister Indira Gandhi in New Delhi Airport, Marwah also
wrote, "Indian Prime Minister Indira Gandhi by nature was a very
reserved person. But this occasion was an exception. I had not
seen a bigger smile on her face. She was smiling and prancing
like a young girl. One could see an immediate personal rapport
had developed between the two."

Like Fenner and Marwah, many others like these globally
renowned personalities became fans of the all time best Bangalee,
born on the alluvial soil of this part of the world in 1920. They
spoke out words of praises beyond limit about Sheikh Mujib, his
charismatic leadership, sky-high personality, indomitable courage
and unconditional respect and commitment for the nation.

Many of them described Bangabandhu as an institution, a
movement, a revolution, an upsurge and above all the main
architect of the Bengali nation's freedom from a long
subjugation. His March 7 (1971) historic speech is being regarded
as the essence of an epic poem, like a few such speeches
delivered by the world leaders of Bangabandhu's status.

During his first ever meeting with Bangabandhu at the Algiers
Non- Aligned Summit in 1973, Cuba's unparalleled leader Fidel
Castro at once hugged Bangladesh's Father of the Nation and spoke
out in an utter emotional expression, "I have not seen the
Himalayas. But I have seen Sheikh Mujib. In personality and in
courage, this man is the Himalayas. I have thus had the
experience of witnessing the Himalayas."

Upon hearing the news of Bangabandhu's assassination, former
British Prime Minister Harold Wilson wrote to a Bengali
journalist, "This is surely a supreme national tragedy for you.
For me, it is a personal tragedy of immense dimensions."

Journalist Cyril Dunn once said of him, "In the thousand-
year history of Bangladesh, Sheikh Mujib is the only leader who
has, in terms of blood, race, language, culture and birth, been a
full-blooded Bengali. His physical stature was immense. His voice
was redolent of thunder. His charisma worked magic on people. The
courage and charm that flowed from him made him a unique superman
in these times.

Famous British journalist Sir Mark Tully, who had the
opportunity to meet Bangabandhu from a point blank, discovered
the greatest charisma of a human being in the good person of a
Bangalee. "I attended several public meetings addressed by Sheikh
Saheb. He had a wonderful voice that could mesmerize the crowd. I
could feel that from the reaction of the people, when Sheikh
Saheb used to address public meetings."

The greatest journalist of New Egypt, Hasnein Heikal (former
Editor of The Al Ahram and a close associate of late President
Nasser) said, "Nasser is not simply of Egypt and the Arab world.
His Arab nationalism is the message of freedom for the Arab
people. In similar fashion, Sheikh Mujibur Rahman does not belong
to Bangladesh alone. He is the harbinger of freedom for all
Bangalis. His Bengali nationalism is the new emergence of the
Bengali civilization and culture. Mujib is the hero of the
Bengalis, in the past and in the times that are."

Father of the Nation' is an honorific bestowed on
individuals, considered the most important in the process of
establishment of a country instrumental in liberating a nation
from colonial or other occupation. George Washington of United
States, Peter I of Russia, Sun Yat-sen of China, Sir Henry Parkes
of Australia, Miguel Hidalgo of Mexico, Sam Nujoma of Namibia,
William the Silent of the Netherlands, Einar Gerhardsm of Norway,
Julius Nyerere of Tanzania, Jomo Kenyatta of Kenya, Carlos Mannel
of Cuba, Mustafa Kemal Ataturk of Turkey, Dr Ahmed Sukarno of
Indonesia, Tunku Abdul Rahman of Malaysia, Mahatma Gandhi of
India and Don Stephen Senanayake of Sri Lanka are the Father of
the Nations. So is Bangabandhu, Father of the Nation of
Bangladesh.