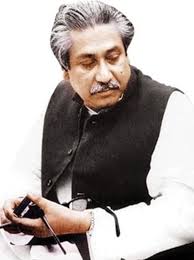 RANGPUR, Aug 2, 2015 (BSS) - Bangladesh has already achieved the status of lower middle income on its way to become a middle income country by 2021 and developed nation by 2041 recalling Bangabandhu's dream.

The deep-rooted conspiracy of anti-liberation elements to reverse independence and spirit of the War of Liberation through assassination of Father of the Nation Bangabandhu Sheikh Mujibur Rahman has failed in fact.

The nation has already completed the trial of Bangabandhu Sheikh Mujibur Rahman assassination, executed most of the killers and the process of bringing back other absconding killers home for execution has been continuing to free the country from the enemies.

The nation has been recalling incomparable contribution and sacrifice of Bangabandhu with due respect through observing the 40th anniversary of martyrdom of Father of the Nation as National Mourning Month started yesterday.

Like the whole nation, the people of Rangpur region, were then stunned after listening the unbelievable radio broadcast over the assassination of the most popular leader of Bengali Nation Bangabandhu Sheikh Mujibur Rahman by a group of unruly army men on August 15 in 1975.

He said Bangabandhu was assassinated at such a crucial time when he had engaged himself in restructuring the war-torn nation in spirit of the War of Liberation to fulfill his dream building Sonar Bangla.

He termed assassination of Bangabandhu is an irreparable loss for the nation and said the vested quarters, however, completely failed to realise their deep-rooted conspiracy and devil design of turning the just-liberated Bangladesh again into Pakistan.

Chilmari upazila chairman Shawkat Ali Sarker, Bir Bikram, said the perpetrators wanted to bury spirit of the War of Liberation once for all in a bid to revive Pakistan through killing the architect of independence Bangabandhu and his family members.

Recalling memories, he said common people remained indoors in silence as military, paramilitary and police forces were patrolling the cities and town's streets; they imposed indefinite curfew and arrested many people during the post August 15 assassinations.

Legendary freedom fighter Taramon Bibi, Bir Pratik, said the pro-Pakistani perpetrators with anti-liberation forces assassinated Bangabandhu as part of their deep-rooted conspiracy to reverse spirit of the War of Liberation and destroy our Independence.

She said that it is still very hard for her to believe that Bangabandhu might be killed on the just-liberated soil where the great leader spent every moment of his life for serving the nation.

However, she thanked Prime Minister Sheikh Hasina for making Bangabandhu's dream successful through defeating culprits of the 1975.

"Bangladesh is moving fast successfully to become the developed Sonar Bangla as dreamt by Bangabandhu, under the dynamic leadership of his daughter Prime Minister Sheikh Hasina," she added.

The perpetrators launched a reign of terrorism through arresting followers of Bangabandhu , freedom fighters and were spreading propaganda against Bangabandhu to mislead the common people to create negative attitudes towards him, they added.

said the common people became wordless and traumatized hearing the unbelievable news of the assassination of Bangabandhu on August 15 in 1975.