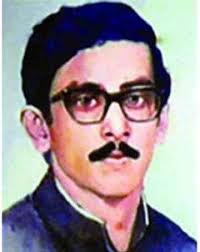 DHAKA, Aug 5, 2015 (BSS) - Despite Father of the Nation Bangabandhu Sheikh Mujibur Rahman was the main target of the killings on August 15 in 1975, Sheikh Kamal was the first man who faced martyrdom in the gruesome attack. One of the killers of disgruntled troops Bazlul Huda shot Sheikh Kamal, the eldest son of Bangabandhu with his sten gun.

It was learnt from Habildar Quddus Sikder, one of the security personnel of Bangabandhu's residence, who gave his deposition before the court during the trial of the Bangabandhu Murder Case.

He said Major Bazlul Huda and Captain Noor Chowdhury first entered into the house along with some other accomplices equipped with firearms who were involved in the barbaric killings in Bangladesh.

Entering the house they saw Sheikh Kamal. Bazlul Huda immediately shot Kamal with his sten gun. Sheikh Kamal moved away from the veranda and went into the reception room to save him. But subsequently he was shot to death there.

This was also briefly narrated by the plaintiff of the Bangabandhu Murder Case Muhitul Islam, also the first witness and personal assistant of Bangabandhu Bhaban.

The incident further proved true following the telephonic conversation of Bangabandhu with the then Chief of Army Staff General Shafiullah who subsequently told in two interviews in1987 and 1993 as Bangabandhu asked him to send troops saying, "Shafiullah, your force launched attack on my home . . . Probably they, in the meantime, killed Kamal. Send some forces quickly."

Besides, expatriate writer and researcher Golam Murshid in his book entitled "Muktijuddho-o-Tarpor" described in details regarding this.

Muhitul said after killing Sheikh Kamal, Mohiuddin and his accomplices were looking for Bangabandhu. Finally, they saw him in the front veranda. Bangabandhu, the very epitome of courageous personality was standing calmly with a pipe of cigarette in hand.

Seeing him, even the killer Mohiuddin was perplexed or puzzled. He could not shoot at Bangabandhu. He merely uttered, "Sir, please come with us."

When finally they were dragging him down the stairs, Bangabandhu shouted, "Where are you taking me?"

At that time Mohiuddin was asked to move away by Huda and Noor opened fire on President Bangabandhu with his sten gun confirming the death of him, the greatest Bengali of one thousand years, and pushing the country towards an uncertainty and dark era.

At 5:40 o'clock in the morning Bangabandhu's body fell down on the stairs. He was still holding his pipe in his right hand. Some bullets had pierced his right chest and belly.

After the assassination of Bangabandhu, the killers' mission was not over. Mohiuddin, Huda and Noor went out of the house. After sometimes, another troop of lancers and artillery entered into the house under the leadership of Aziz Pasha and Muslehuddin.

Pasha went upstairs with his armed men. Subedar Wahab Joardar was already up there. They went and picked up Russell, Sheikh Naser, a servant and took them downstairs of the Bangabandhu Bhaban.

Pasha and Muslehuddin sprayed bullets on Begum Fazilatunnesa Mujib, Sheikh Jamal, his newly married wife and Kamal's wife with a sten gun in the bedroom.

The killers had kept Russell in the guardroom in the downstairs where Russell was crying and saying that he wanted to go back to his mother.

Pasha ordered a Havildar to take him (Russell) to his mother. The Havildar truly took him to his mother going upstairs and shot him dead from point blank range. Due to firing, part of Russell's skull flew away.