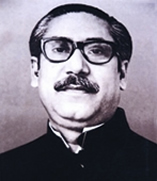 FARIDPUR, Aug 1, 2016(BSS):- Father of the Nation Bangabandhu Shaikh Mujibur Rahman, who was born in a remote village of Tungipara crisscrossed by rivers, canals and water bodies in the then Gopalganj sub-division, had undertaken many visits and tours to Faridpur district headquarter as a student leader, political leader and also as a prisoner.

During his life time in erstwhile Pakistan days he visited and toured Faridpur for at least twenty times, as reminisced by late octogenarian ailing political personality S.M. Nurunnabi before his death who was also Advisory Council member of Awami League and was general secretary of greater Faridpur district Awami League.

Late SM Nurunnabi while reminiscing his first contact with Bangabandhu told this correspondent last year on August 16 that he first came to know Bangabandhu, then young Shaikh Mujib in 1946 elections. Nurunnabi, at that time was a student of class VI and Bangabandhu came to Bhanga as a student of Calcutta Islamia College with the responsibility of the chief coordinator of election committee to canvas for the election in Faridpur Sadar sub- division(now Faridpur district).

Nurunnabi recalled that most of the time of election campaign young Sheikh Mujib carried on campaign for the Muslim League candidates on foot or riding bi-cycle.

Narrating the simplicity of Bangabandhu Nurunnabi at that time told BSS that most of the time he used to remain unfed or half-fed during the whole day because of the election work. But through his untiring efforts and charisma Bangabandhu mobilized public opinion in favor of Muslim League at the instruction and guidance of his political mentor H.S. Shuhrawardy. Because the result of 1946 election was a necessity for creating Pakistan.

But after the partition of India, the activities of the rulers of newly independent Pakistan frustrated Bangabandhu and he realized that this Eastern wing of Pakistan will have to suffer as the rulers started repressive measures against the Bangalees, as told by Nurunnabi.

He realized that the Pakistani rulers wanted to change the century old cultural heritage of the Bangalees forcibly through introducing Urdu as the only state language, Nurunnabi said and added that Bangabandhu realized that Pakistan government pursued policies that deprived the Bangalees in all spheres of life.

During his long imprisonment for protesting against the Pakistani rulers on many occasions Bangabandhu was in Faridpur jail custody for one month as a transferred prisoner from Gopalganj jail in 1950. Again during the February language movement in 1952 Bangabandhu who was already in custody in Dhaka central jail was shifted to Faridpur jail on February 18 and got release from here on February 25, as told by Nurunnabi.

After release he was given a heroic welcome at the jail gate by the political comrades who profusely garlanded him where Nurunnabi was present among others with late Imamuddin Ahmed, late Shamsuddin Molla, late Liaquat Hossain, late Aminul Islam Majnu. Imamuddin Ahmed and Shamsuddin Molla were law makers in 1970 and 1973 elections.

Nurunnabi recalling a close discussion on the night of his release said Bangabandhu told 'It will be not possible to remain with Pakistan due to cultural, social and economic exploitations by the West Pakistani rulers.'

Nurunnabi said that this very expression of Bangabandhu at the very early days of Pakistan was a clear indication for a separate homeland for the Bangalees.

Bangabandhu during the whole fifties and sixties came to Faridpur for addressing meetings at local historical Ambica Maidan, Rajendra college ground and at Faridpur stadium. In all the meetings his language and rhetorics attracted audience where he explicitly presented the misrule, oppression against the then East Pakistan, Nurunnabi recollects. During his Faridpur night halts he used to reside in the residences of some of his relatives and in a Duk-bunglo of Zilla Board located in Jhiltuly area, Nurunnabi informed this correspondent.

After liberation of Bangladesh Bangabandhu as Prime Minister visited Faridpur town some time in the month of March 1972 to meet his fellow political colleagues, workers and friends of all sheds and opinions, as told by Principal Delwar Hossain who, later, was elected a law maker on Awami League ticket from Faridpur- 1 constituency in 1973. Delwar who is very sick now said that Bangabandhu valued personal relationship and also led a very simple life unlike our conventional politicians.

Recalling their talks with Bangabandhu at local circuit house,
septuagenarian ailing Principal Delwar informed that at one stage late law maker Imamuddin Ahmed demanded Bangabandhu to set up a medical college here. In reply Bangabandhu told them that 'I am struggling to run the existing medical colleges due to fund constraints. Moreover a huge sum is being spent for the rehabilitation of one crore people who left the country during
Liberation War. Procurement of food and other essentials are being arranged to feed the people as the Pakistan army destroyed everything during the nine months, so at the moment it is not possible on the part of the government to set up a new medical college.'

On March 3 of 1975 Bangabandu came to Boalmari under Faridpur district as the President of Bangladesh to inaugurate the re-excavation work of derelict Chnadana -Barasia river for ensuring water for the purpose of navigation, irrigation and pisciculture, said Principal Delwar who was also the law maker of that area.

Under the present government at the initiatives of local Awami League leaderships, district administration and the Jail authorities have decided to set up a Mural of Bangabandhu inside the jail on the site of old buildings now demolished. Bangabandhu was interned in that building for some days during the language movement. But in 1950 he was in jail hospital for one month as a division prisoner. The jail authority told BSS that an estimate for construction of Bangabandhu's Mural has been sent to the Home Ministry.

It may be mentioned here that present LGRD & Cooperatives Minister Engineer Khondoker Mosharraf Hossain on Saturday last announced in an anti militancy rally that the work on the Mural would start soon.

It may be noted here that very few people are now alive to recollect Bangabandhu's memory in Faridpur. Those who are alive they just saw him but had no contact.