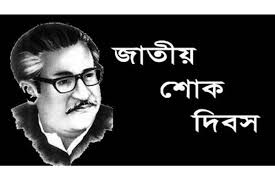 DHAKA, Aug 12, 2016 (BSS)- Speakers at a discussion today laid emphasis on a broad-based unity of the pro-liberation forces under the bold and farsighted leadership of Prime Minister Sheikh Hasina at the crucial juncture of the nation to uproot militancy from the country with a view to safeguarding independence and sovereignty.

They held the opinion while speaking at a discussion organised by
Bangabandhu Parishad at the National Press Club marking the National Mourning Day commemorating the 41st anniversary of martyrdom of Father of the Nation Bangabandhu Sheikh Mujibur Rahman.

Dr SA Malek said that local and international anti-liberation forces tried to transform Bangladesh into a neo-Pakistan through the assassination of Father of the Nation and the supreme leader of the great Liberation War Bangabandhu Sheikh Mujibur Rahman.

"The killers not only murdered Mujib as an individual, they killed 7.5 crore people of the country. Alongside, they also ruined the spirit of the war of liberation, trampled the four pillars (fundamentals) of the constitution and transformed a secular Bangladesh into a communal state.
Behind all these, there were direct assistance from Pakistan and the
international imperialist forces," he added.

Dr Malek urged the international community to let the world people
including the masses of Bangladesh know about the identity of those killers of Bangabandhu and the main reason behind the carnage of August 15 of 1975.

Prof Arefin Siddique said that Bangabandhu dreamt of establishment of an ideal society free from exploitation, deprivation and corruption and he waged a long 23-year-old political movement against exploitation and deprivation by Pakistani rulers for emancipation of the people of eastern part of the country and their fundamental rights.

"Had Bangabandhu been alive till date, the country would have emerged in the world as a developed and prosperous state much earlier," the DU VC added.