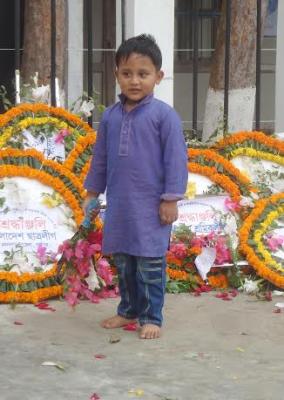 LAKKHMIPUR, Aug 12, 2016 (BSS)- A minor boy in Lakkhipur has stunned all with his extraordinary power of replicating the historic 7th March speech of Father of the Nation Bangabandhu Sheikh Mujibur Rahman.

"Whenever Jian watches Prime Minister Sheikh Hasina on television, he starts delivering the speech by replicating the gesture and posture of Bangbandhu," Jian's father Sajjadur Rahman, a journalist in Lakkhmipur, told BSS.

Rahman uploaded an audiovisual of Jian's replication of the speech on social media Facebook which drew much attention of the people.

Jian's mother Afroj Jahan Niru said realizing son's interest in the speech, she wrote the transcript of the full speech of Bangabandhu and used to read out before Jian.

"Jian listened to the speech with much interest ... later, we let him to listen to the audio record of the speech in mobile phone and thus he learnt to replicate the speech," Niru said.

"Now everyday he sleeps after listening to the speech," Niru added.