Yeafesh for practicing ideology of Bangabandhu 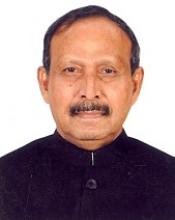 DHAKA, Aug 13, 2016 (BSS) - Science and Technology Minister Architect Yeafesh Osman today urged youths to uphold and practice the ideology of Father of the Nation Bangabandhu Sheikh Mujibur Rahman, saying only then the country would turn into 'Sonar Bangla'.

"We got an independent country because of the lifelong struggle and sacrifice of Bangabandhu Sheikh Mujibur Rahman. If he was not killed on August 15, 1975, this country would have become a developed nation much earlier," he said.

The minister said this while addressing a discussion and Doa Mahfil organized marking the 41st martyrdom anniversary of Bangabandhu at National Institute of Biotechnology (NIB) auditorium Savar.