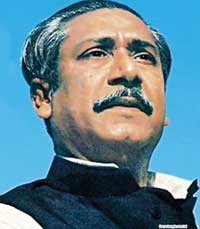 DHAKA, August 18, 2016 (BSS) - Bangladesh has now five gas fields worth $20 billion due to the historic role of Father of the Nation Bangabandhu Sheikh Mujibur Rahman in ensuring the country's energy security.

He said Bagabandhu bought five gas fields involving $20 million from the then Shell Oil Company for the country on August 9 in 1975. "Now these five gas fields are priced around $20 billion," he said while addressing the seminar as the chief guest.

The energy adviser said these gas fields are not only supplying gas but also contributing to achieving energy security of the country for the last four decades by implementing the time befitting decision of Bangabandhu.

Describing Bangabandhu's farsighted leadership, Dr Tawfiq said that he included rural electrification in the constitution for reaching electricity to the rural areas of the country.

"Bangabandhu was a simple man but unique as a leader of the masses, rare in the world, and he could easily reach the hearts of all by his charismatic personal conduct", the adviser said.

He said, "We lost Bangabandhu but his worthy daughter Prime Minister Sheikh Hasina took Bangladesh to a dignified level by fulfilling the dream of Father of The Nation.

Highlighting Bangabandhu's visionary leadership, Dr Mashiur Rahman said the Bangabandu's government finalized all arrangements for signing an agreement with the USAID for food after discussions.

But, he added, the agreement could not be signed due to the USAID's reluctance as Bangladesh had then trade relations with the communist countries including Russia and Cuba.

Later, the then Prime Minister of India Indira Gandhi despite acute food crises in her country diverted a ship loaded with food grains to Bangladesh only for Father of the Nation Bangabandhu Sheikh Mujibur Rahman, he mentioned.

Dr Mashiur, then a personal secretary of Bangabandhu, said Bangabandhu started his all-out works to reconstruct Bangladesh, as the Pakistani troops destroyed the country's whole infrastructure during the War of Liberation.

As a visionary leader, Bangabandhu restored full operation in the Chittagong sea port with the help of Russia's skilled manpower, he said.

The seminar was followed by the screening of a documentary on Bangabandhu and his dynamic leadership. Among others, Kabir Ahmed Bhuiyan, president of IEB, also spoke on the occasion.