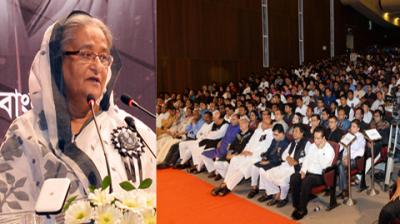 DHAKA, Aug 31, 2017 (BSS) - Prime Minister Sheikh Hasina today said Bangladesh has become a role model of development as the Awami League came to power thrice despite orchestrated conspiracies to dislodge it from power.

"The world recognition to Bangladesh as a role model of development didn't come without any cause behind it. It became possible as the country is under the patriotic and dedicated leadership of Awami League," she said.

Sheikh Hasina said once Bangladesh was known as the land of flood, water surge, poverty and hunger, where people had no hope and future. Unfortunately, the post 1975 rulers presented Bangladesh before the world community in that manner.

After 21 years Bangladesh Awami League assumed power and had taken the initiative to erase the bad name, taking various pragmatic steps for country's development in all sectors, she said.

Sheikh Hasina said the lessons that she had learnt from her parents to love the people, work for country's welfare as well as taking risk for the country, always guided her to serve the nation.

Sheikh Hasina said her party always tried to do better for the people. Awami League leaders and workers always stand beside the people in their any woes. Serving the mankind in any situation is their prime objective, she said.

Focusing on the outcome of the August 15, 1975 carnage in the country's history the prime minister said, "We have lost everything on that day pushing Bangladesh to an era of darkness. Rule of militancy and terrorism gained ground after the killing.

She said politics is for the welfare of the people, not for perishing people. But a section of politicians have burnt people alive in 2013, 2014 and 2015 to achieve their conspiracies.

"We are moving ahead overcoming those conspiracies and serving the country for three terms in power with the support of the people," she said.

Sheikh Hasina said Father of the Nation is no more amongst us. But we have his ideology, which should be our guiding principles in politics.

Sheikh Hasina said Chhatra League leaders must be well educated, prudent and judicious which is very crucial for taking the future leadership of the country.

"We have seen how a country may suffer when uneducated leaders rule the country," she said, adding that ignorant leaders can burn people alive, indulge corruption, launder money and amass wealth illegally.

The prime minister said progress of a nation is not possible without peace. So, we always want peace to take forward the country towards progress gradually.

She urged the Chhatra League leaders to take oath to build Bangladesh as a developed and prosperous country as dreamt by Bangabandhu.