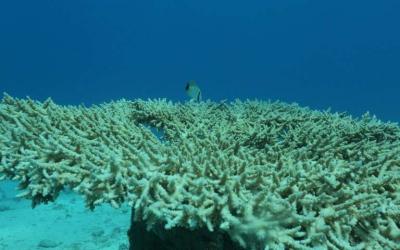 TOKYO, May 18, 2018 (BSS/AFP) - Japan's biggest coral reef has not
recovered from bleaching due to rising sea temperatures, with only one
percent of the reef in a healthy condition, according to a government study.

The overall volume of coral in Sekisei Lagoon in southwestern Japan near
Okinawa had already plunged by 80 percent since the late 1980s due to rising
water temperatures and damage caused by coral-eating starfish.

"If coral reefs don't recover, it means a loss of rich fauna for a variety
of creatures and would have grave impact on the ecosystem in the region,"
ministry official Chihiro Kondo told AFP on Friday.

For the first time since 2008, the ministry analysed satellite photos and
information from some 1,000 monitoring sites for the Sekisei Lagoon and two
other reefs around the Ishigaki and Iriomote islets in Okinawa.

Two other neighbouring lagoons had similar results with the ratio of
healthy areas around one percent.

Bleaching occurs when abnormal environmental conditions, such as warmer sea
temperatures, cause corals to expel tiny photosynthetic algae, draining them
of their colour.

Corals can recover if the water temperature drops and the algae are able to
recolonise them.

"But the latest study shows that corals haven't recovered much since 2008,
presumably partly because of the 2016 bleach," Kondo said.

One of the worst mass bleaching episodes on record took place in 1998 when
the El Nino phenomenon was exceptionally strong, affecting reefs in 60
tropical countries.

Corals make up less than one percent of Earth's marine environment, but are
home to more than 25 percent of marine life.