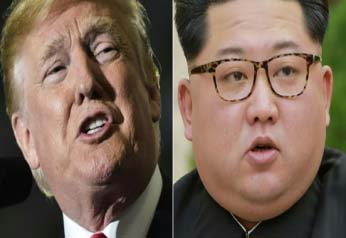 HONG KONG, May 23, 2018 (BSS/AFP) - Asian markets sank Wednesday after Donald Trump cast doubt on a historic summit with North Korean leader Kim Jong Un and appeared to hit out at a deal with China that averted a damaging trade war.

Trump warned there was "a very substantial chance it won't work out" when asked about next month's landmark talks, adding they could be delayed, or even called off, if the North does not agree to give up its nuclear weapons.

His comments, following a meeting with his South Korean counterpart Moon Jae-in, come after Pyongyang earlier this month denounced US demands for unilateral disarmament, throwing the Singapore gathering into uncertainty.

The expected meeting, and the thawing of relations between the North and its rivals in recent months, has provided hope to markets that peace can be achieved on the Korean peninsula.

The US president's comments helped spark a reversal on Wall Street, where all three main indexes ended the day in negative territory.

Adding to the selling were his comments on the weekend's agreement to call off a trade spat with China.

US Treasury Secretary Steven Mnuchin and Chinese Vice Premier Liu He said Sunday they had agreed to pull back from imposing threatened tariffs on billions of dollars of goods, and continue talks on a variety of trade issues.

However, Trump said he was "not satisfied" with the status of the talks, fuelling worries that the world's top two economies could still slug out an economically painful trade war.

"President Trump was keen to remind us overnight that the trade war is not about to leave the stage anytime soon," said Stephen Innes, head of Asia- Pacific trade at OANDA.

Just earlier in the day China had announced said it would slash tariffs on auto imports to 15 percent from 25 percent, which was taken as a sign of a thaw in frictions.

Asian markets were broadly lower. Tokyo ended the morning down more than one percent, while Hong Kong returned from a one-day break to drop 0.7 percent and Shanghai slipped 0.5 percent.

Sydney slipped 0.2 percent, Singapore was 0.8 percent off and Wellington dipped 0.4 percent. However, Seoul was up 0.1 percent, while Manila and Jakarta also edged higher.

The dash for safer investments saw the yen -- a go-to asset in times of uncertainty and turmoil -- rise against the dollar with lingering concerns about a scandal enveloping Japanese Prime Minister Shinzo Abe adding to the cautious tone.

However, the US unit pushed up against the yen, pound and higher-yielding currencies such as the Korean won and Indonesian rupiah.

The release later Wednesday of minutes from the Federal Reserve's most recent policy meeting is on traders' radars, with hopes they will provide some clarity on the central bank's plans for raising interest rates this year.

The European Central Bank will follow suit on Thursday.